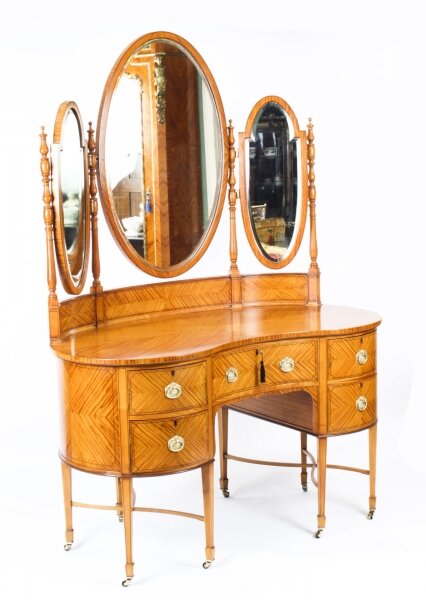 This is a totally fabulous Antique satinwood kidney shaped dressing table with ebonised inlay, attributed to Maple & Co,  Circa 1880 in date.

The stunning satinwood with ebonised line inlay and crossbanding. It has  a useful central drawer, a pair of drawers on each side and the triple oval mirrors is are adjustable.

There is no mistaking its superb quality and fantastic design, which alone is certain to make it a talking point in your home and become a treasured addition to the furniture in your bedroom.

Satinwood is a hard and durable wood with a satinlike sheen, much used in cabinetmaking, especially in marquetry. It comes from two tropical trees of the family Rutaceae (rue family). East Indian or Ceylon satinwood is the yellowish or dark-brown heartwood of Chloroxylon swietenia.

They were by Royal Appointment and  became one of the leading furniture manufacturers of the Victorian and Edwardian eras. They used only the finest quality timber which was imported directly from all over the world.

Maple and Company were founded in 1841 in Tottenham Court Road, London and had premises there until the 1980s. By the 1880s they were the largest and most successful furniture makers in the world, their huge emporium having become a tourist attraction in its own right. In addition to their middle class clientele, they furnished Embassies, hotels, beautiful homes and palaces all over the globe, including Tsar Nicholas's Winter Palace, the Hofburg Imperial Palace in Vienna, and many of Britain's country houses. 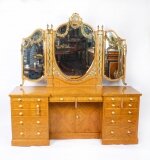