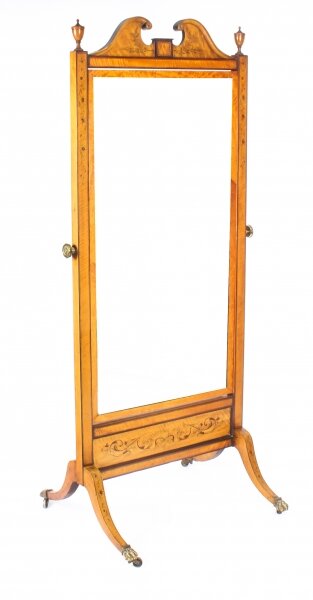 The central rectangular mirror plate is shaped with a bevelled edge.   It  features a swan neck pediment flanked by urn finials and is beautifully inlaid with floral marquetry embellished with penwork.

Raised on square columns with boxwood and ebony line inlay throughout, the whole supported on swept supports with brass lion's paw castors.

Cheval Mirror - also called horse dressing glass or psyche, a  tall dressing mirror, suspended between two pillars, usually joined by horizontal bars immediately above and below the mirror and resting on two pairs of long feet.

The cheval glass was first made toward the end of the 18th century. The mirror could be tilted at any angle by means of the swivel screws supporting it, and its height could be adjusted by means of lead counterweights and a horse, or pulley, from which the name was taken.

Thomas Sheraton, in The Cabinet Dictionary (1803), included a design with a nest of drawers at one side and another with a writing surface. When wardrobes were fitted with mirrored doors, the cheval glass became unnecessary in bedrooms.


Satinwood
is a hard and durable wood with a satinlike sheen, much used in cabinetmaking, especially in marquetry. It comes from two tropical trees of the family Rutaceae (rue family). East Indian or Ceylon satinwood is the yellowish or dark-brown heartwood of Chloroxylon swietenia. 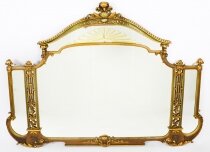