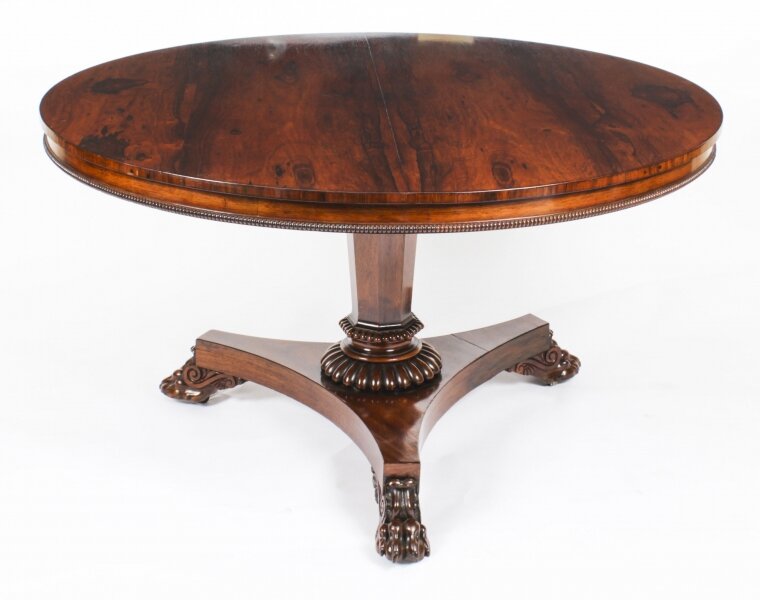 Ref: A2891
Price: £2,950.00
This is an elegant and rare English antique William IV Gonçalo Alves centre / breakfast table by the world renowned cabinet...
Question about item
Request a virtual viewing

This is an elegant and rare English antique William IV Gonçalo Alves centre / breakfast table by the world renowned cabinet makers Gillows of Lancaster, circa 1830 in date.

The tilt-top table in stunning Gonçalo Alves, having stunning grain to the top above a shallow beaded frieze. The tilt top hinging on a substantial brass clasp revealing the maker's stamp to the platform, and raised on an octagonal central column on a lobed tripartite base with three paw feet.


It is an extremely versatile table and can be placed in your hallway, living room, dining room, or reception.

In excellent condition having only been beautifully cleaned and waxed in our workshops, please see photos for confirmation.

Gillow & Co.
was originally founded in Lancaster in 1730. Gillow’s of Lancaster was a household name in Victorian Britain, and the firm exported furniture throughout the Empire. Key to the company’s success was the dynamic father and son team at its core.