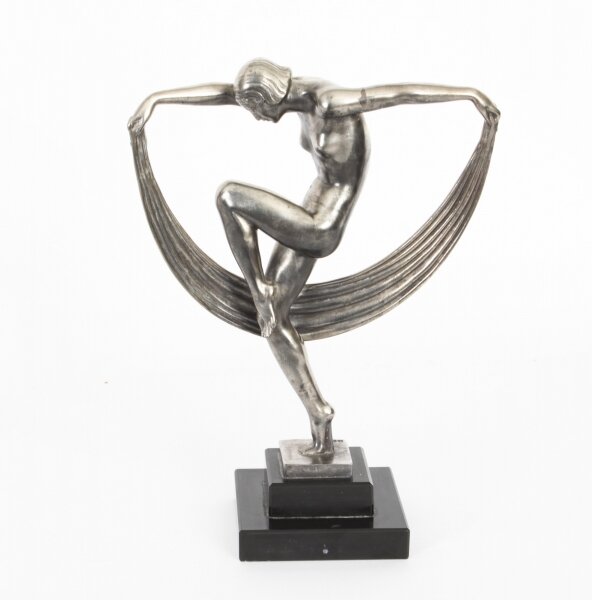 Ref: A2662
Price: £1,500.00
A beautiful Art Deco sculpture of a dancer from Circa 1930 signed DENIS,  from the foundry workshop of "Max le Verrier Paris"....
Question about item
Request a virtual viewing

A beautiful Art Deco sculpture of a dancer from Circa 1930 signed DENIS,  from the foundry workshop of "Max le Verrier Paris".

The sculpture in silver patina art cast-bronze features the dancer with outstretched arms holding a scarf in a ballet pose and raised on a square black marble stepped plinth.

The sculpture is listed as a "Naked dancer to the scarf", model No. 936, at the catalogue Raisonné of Max le Verrier workshop. Signed DENIS, sculptor (presumed pseudonym of Marcel Bouraine)
This high-quality hot cast solid bronze was produced using the traditional "lost wax" process, otherwise known as the "cire perdue" method.
This is a splendid bronze sculpture and it will no doubt become the centrepiece of your Art Deco collection.

Max Le Verrier was a French sculptor best known for his elegant figurines and lamps. Whether depicting dancers or panthers, Le Verrier crafted his pieces in the Art Deco style. Born Louis Octave Maxime Le Verrier on January 29, 1891 in Neuilly-sur-Seine, France, the artist moved to London in 1909 before being enlisted by the French military at the outset of World War I. Shot down by German fighter planes during an air battle, he was captured and sent to prison camp in Munster, Germany, where he produced objects from clay. After the end of the war the artist attended the Beaux-Arts school in Geneva, where he made some of his first statuettes. Returning to France in 1918, Le Verrier opened his own atelier and gathered success during the 1920s and 1930s. With a fake identity the artist fled to the South of France during the Nazi occupation of Paris during World War II. Yet again he returned to Paris after the fighting ceased in 1944, where he lived and worked until his death on June 6, 1973 at the age of 82. Today, the Maison Max Le Verrier continues the tradition of the artist’s former workshop in Paris.

In 1928, Max Le Verrier carved from a live model, his famous CLARTE, the woman with a lighted ball, the main piece of art of his collection. In fact, he needed 3 different models: one for the head, another one for the chest, and one for the legs. For this last part, he asked an African-American woman playing in Josephine BAKER’s ballets to pose. A very 1930’s candle stand, taking back the idea of an antique goddess of light, symbolizing the era with a boyish hairstyle but also by the sedateness of her figure.
The CLARTE was displayed in the exhibition « LUMIERES » -Lights- at the Georges Pompidou Center from May to August 1985 but also in 1987 the exhibition « MADE IN FRANCE » at Harrod’s in London and in the exhibition « DE MAIN DE MAITRE » at the Grand Palais in Paris. It was also exhibited in the MARTINEZ hotel in Cannes in 2000. Today, two of them can be admired at the LUTETIA hotel in Paris.


Art Deco or Deco,
is an influential visual arts design style which first appeared in France during the 1920s, flourished internationally during the 30s and 40s.