Ref: A1605
Price: £ 0.00
A superb burr walnut, marquetry and ebonised sewing table, Circa 1860 in date The ornately floral marquetry inlaid lid with...

A superb burr walnut, marquetry and ebonised sewing table, Circa 1860 in date

The ornately floral marquetry inlaid lid with ormolu border enclosing a fitted interior with drawers and compartments and raised on tapering reeded legs joined by an H stretcher and terminating in toupie feet.

During his long and illustrious career as a soldier in the British Empire, Lord Kitchener spent many years in Egypt. He was appointed Inspector General of the Egyptian Police in 1890 and was made Commander in Chief of the Egyptian Army in 1892. He then served for several years in other countries before he returned to Egypt in 1911 as British Agent and Consul General during the rule of Abbas Hilmi II.

This marquetry sewing table belonged to Lord Kitchener and was in his house in Cairo. After Lord Kitchener's death in 1916, the vendor's grandmother, Mrs H W (Jessie) Dudgeon, attended the sale of his household effects and purchased the sewing table, then by descent to the current vendor, see photograph of letter. 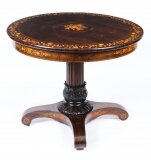