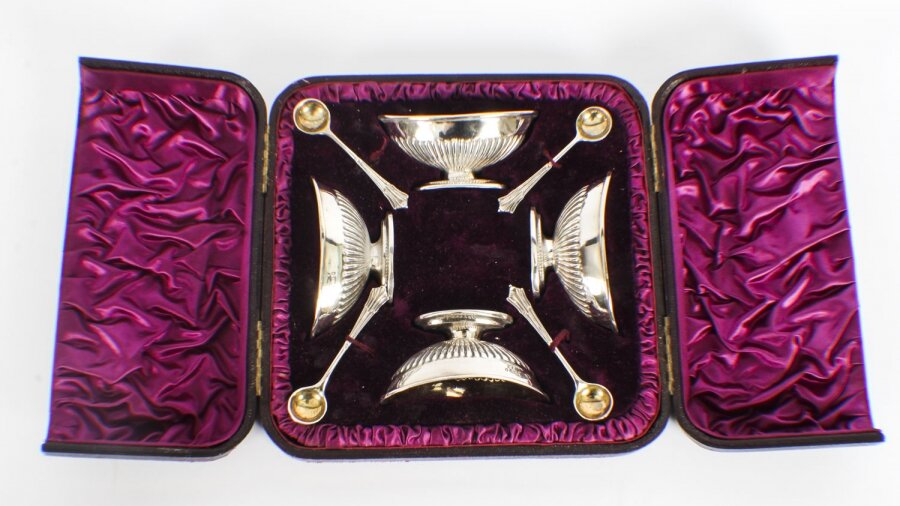 Each salt is navette shaped and raised on an oval foot with gilded interior, the miniature Albany pattern spoons with gilded bowl.


This set would definitely enhance your dining experience as well as make a beautiful gift.

These handsome salts are in really excellent condition. Please see photos for confirmation of condition.

More
Charles Boyton was a well known silversmith who was apprenticed in 1807 to William Seaman, Hull's Street, St. Luke's.

In the last period Charles Boyton (III) (son of C.H. Boyton) acted as governing director and the firm was active as wholesale manufacturer of silver and electroplate. The firm encountered economic difficulties and in 1933 a new company was created, entitled Charles Boyton & Son Ltd (active at Wardour Street from 1936 until 1977). In 1934 Charles Boyton (III) left the firm and opened his own business at 114 Marylebone Lane with retail premises at 98 Wigmore Street. His production in Art Deco style was engraved with a facsimile of his signature. The activity closed after 1948.

Salt
As far back as 6050 BC, salt has been an important and integral part of the world’s history, as it has been interwoven into countless civilizations. Used as a part of Egyptian religious offerings and valuable trade between the Phoenicians and their Mediterranean empire, salt and history have been inextricably intertwined for millennia, with great importance placed on salt by many different cultures. Even today, the history of salt touches our daily lives. The word salary was derived from the word salt. Salt was highly valued and its production was legally restricted in ancient times, so it was historically used as a method of trade and currency. The word salad also originated from “salt,” and began with the early Romans salting their leafy greens and vegetables. Undeniably, the history of salt is both broad and unique, leaving its indelible mark in cultures across the globe.
More