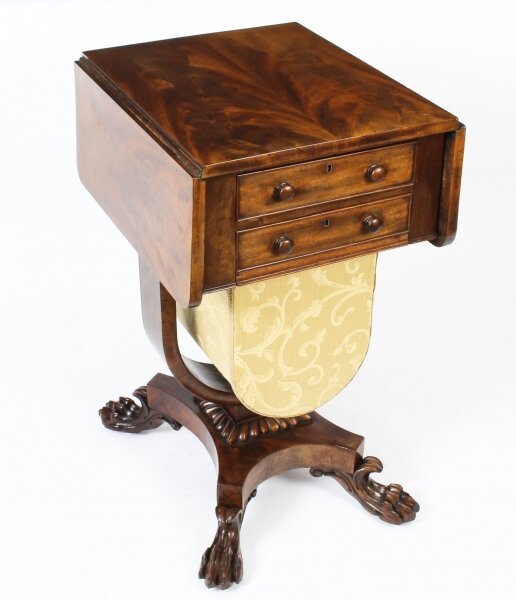 The drop-leaf top with rounded corners supported by fly brackets ornamented with foliate scroll carving, above two cock-beaded drawers to one side and corresponding dummy drawers to the other.

The upper drawer having a baize lined writing slope above a pen & ink compartment housing a glass ink pot with 'Mosley's Revolving' lid. The lower drawer with a partitioned interior above a deep U-shaped fabric well clad in yellow damask and cradled by a curved support above a short square stem with gadrooned moulding meeting a quadriform platform raised on carved lion paw feet.

This piece is of the highest quality, made of decorative figured flame mahogany and is in excellent condition.
A fabulous example of William IV period furniture.
Condition:

William IV - the brief reign of William IV (1830 – 1837) marked a period of transition between the Regency period (which had been an age of innovation based on revivalist styles such as ancient Egypt, and the Grecian designs) and the Victorian era. 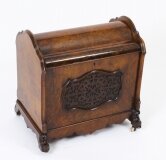