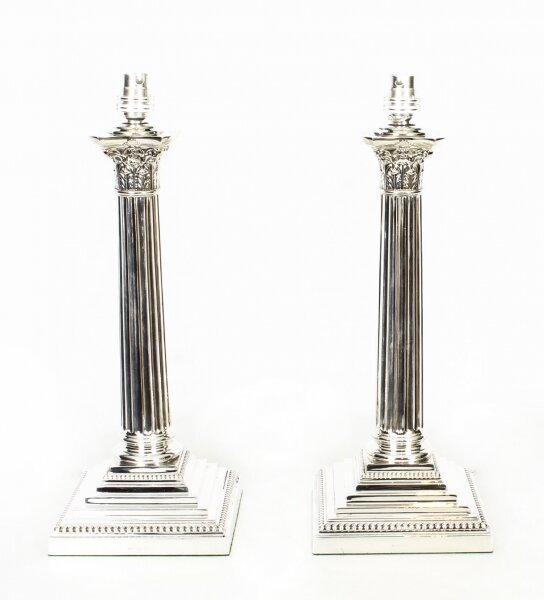 This opulent pair of antique table lamps feature Kingly Corinthian Capital sdecorated with classical ornate foliage in the form of splendid acanthus leaves above  striking tapering and slender fluted shafts.
They stands on large and weighted  stepped square base, which feature beaded decoration.
Add an element of Greek Classical style to your home with this exquisite pair of antique silver-plated table lamps.

Hawksworth, Eyre & Co
was founded in 1833 by Charles Hawksworth and John Eyre as successors of Blagden, Hodgson & Co. The first mark was registred in 1862. They were manufacturers and silversmith of silver and silver plated objects.

The partnership was dissolved in 1869 and the business was continued by James Kebberling Bembridge, Thomas Hall and George Woofhouse. In the 1870s the firm was converted into a limited liability company under the style Hawksworth, Eyre & Co Ltd. Further marks were registered in 1900 & 1912. The firm went into liquidation in the 1930s.

It has been suggested that the foliage of the Greek Corinthian capital was based on the Acanthus spinosus, that of the Roman on the Acanthus mollis. The leaves are generally carved in two "ranks" or bands, like one leafy cup set within another. One of the most beautiful Corinthian capitals is that from the Tholos of Epidaurus (400 BC); it illustrates the transition between the earlier Greek capital, as at Bassae, and the Roman version that Renaissance and modern architects inherited and refined. 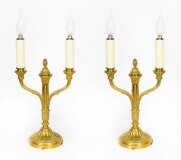 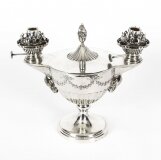