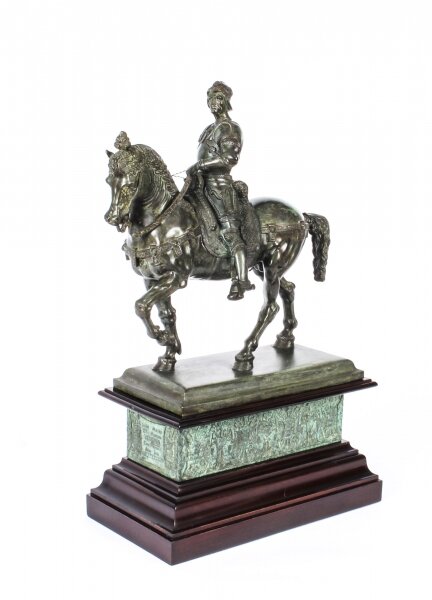 Ref: A1016
Price: £3,300.00
This is a superb antique patinated bronze Equestrian Statue of Bartolomeo Colleoni, circa 1860 in date.   This...
Question about item
Request a virtual viewing

This is a superb antique patinated bronze Equestrian Statue of Bartolomeo Colleoni, circa 1860 in date.
This stunning patinated bronze statue is after the original Renaissance sculpture which was executed by Andrea del Verrocchio in 1480–88, in Italy. Exactly as in the original, it portrays the commander Bartolomeo Colleoni, who served for a long time under the Republic of Venice, wearing typical battle ready military equipment while riding his horse.
The artist has faithfully replicated the original pose of the horse who is moving with a raised leg and is supported by the other three legs, therefore, conveying a great sense of movement.
The figure of Colleoni himself is extremely life-like as much as to convey the idea of a strong military commander, emanating titanic power and energy.
It is raised on an equally magnificent rectangular bronze and hardwood base with the bronze part being inscribed in Latin ' Bartolomeo Coleono Bergomense Militare' and 'Loane Mavro Et Marino Venerio MCCCCLXXXXV'.
This high-quality hot cast solid bronze was produced by using the traditional "lost wax" process, otherwise known as the "cire perdue" method.
The craftsmanship is second to none throughout all aspects of this striking bronze which is sure to add an unparalleled touch of class to your home.