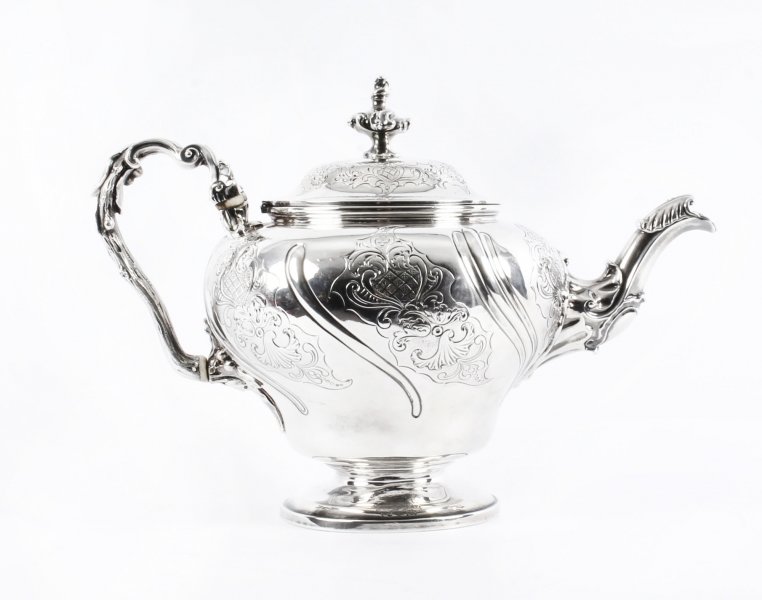 Ref: 09936
Price: £4,500.00
This is an exceptional antique English George IV sterling silver teapot by the world-famous silversmith, Paul Storr, 1829 in...
Question about item

This is an exceptional antique English George IV sterling silver teapot by the world-famous silversmith, Paul Storr, 1829 in date.

It features a distinguished faux-bois handle with remarkable floral and foliate engraved decoration. This sumptuous design is repeated in the spout, proving the silversmith has perfected mastery in the creation of wonderful and luxurious silverware - Paul Storr never tired of adding detail to create a true piece of artwork.

The underside bears the full hallmarks: the Lion passant for sterling silver, the leopard head for London, the letter 'o' for 1829 and the maker's marks 'PS' for Paul Storr.

born in London England in 1771, was to become one of the most talented silversmiths and goldsmiths of the nineteenth century. Today his legacy of exceptionally well crafted silver, found worldwide in museums and private collections, leaves one in awe when compared to that of his contemporaries. After having served a seven year apprenticeship from the age of 14, he began his career in 1792 when he went into a brief partnership with William Frisbee. This did not last and in 1793 a new mark, (his initials ‘P S’) was entered. By the beginning of the nineteenth century he had established himself as one of London’s top silversmiths producing, amongst others, commissions for Royalty.