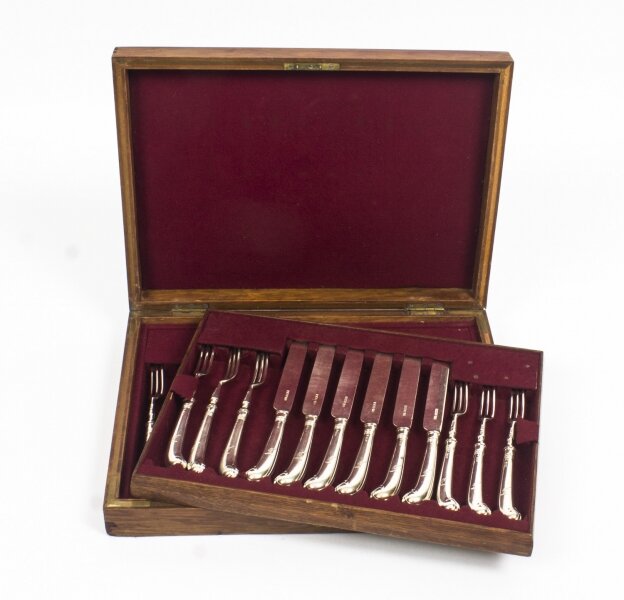 Ref: 08801
Price: £ 0.00
This is a beautiful antique and rare English walnut boxed set of twelve pairs of sterling silver fruit forks and knives, with...

This is a beautiful antique and rare English walnut boxed set of twelve pairs of sterling silver fruit forks and knives, with hallmarks for Sheffield 1905 and the makers mark of the renowned silversmith Harrison Brothers & George Howson.

All with stunning pistol grip handles engraved with an interesting crest depicting a hand holding a sword.

This is a fabulous set which will gracefully adorn any table.

This is the complete set and  it is in really excellent condition.

Thomas Sansom, plate worker at Norfolk Street, Sheffield, entered his mark at Sheffield Assay Office on December 22, 1808. Later the business was continued as Thomas Sansom & Sons, in partnership with his sons Abraham, John and William Sansom. In 1847 the business was acquired by James William Harrison, Henry Harrison and James William Howson, acting as Harrison Brothers & Howson.
James William Harrison retired in 1876 and the business was continued by his partners. Later they were joined in the partnership by George Hawson (son of J.W. Howson), Francis William Harrison (son of Henry Harrison) and John Brocksopp Wilkinson (nephew of J.W. Harrison).
From 1892 the activity was continued by George Hawson, F.W. Harrison and J.B. Wilkinson.
The firm was originally active at 67 Norfolk Street, Sheffield (1866-1896), expanding to Shoreham Street Works (1880) and to a new factory in Carver Street (1901).
Harrison Brothers & Howson opened its London showrooms at 11 Hatton Garden (1866) and 43-44 Holborn Viaduct (1885), moving to Regent Arcade House, 19-25 Aryle Street (1941).
Later, the firm ceased its activity and the brand of Harrison Brothers & Howson was revived in 1978, under the style of Harrison Brothers & Howson Ltd, a subsidiary of Ben J. Dix of London Ltd. 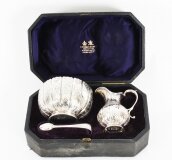