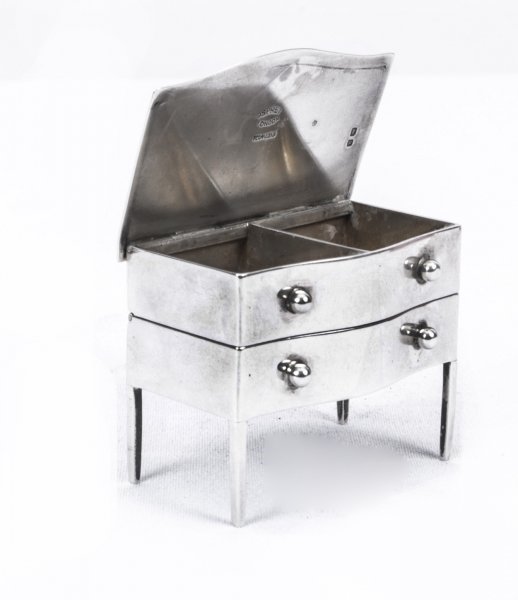 Ref: 07473
Price: £ 0.00
From a major maker requiring little or no introduction, this is a rare and very attractive antique Edwardian English sterling...

From a major maker requiring little or no introduction, this is a rare and very attractive antique Edwardian English sterling silver stamp or small jewel box that is sure to find a place in the collection of an enthusiast before very long.

The sterling silver novelty box bears hallmarks for London 1909 as well as the makers mark of the world renowned retailer and silversmith, Asprey's of Bond Street, London together with the relevant patent registration reference which is RD549313.

There can be few retail brands as important and iconic as Aspreys of Bond Street. Since their formation in 1781 by William Asprey this firm has grown in both size and stature and have occupied the same bond Street premises since 1847 - still trading there to this day.

The Aspreys silver novelty box is made to depict a serpentine commode and has two lift up hinged tiers, and a gilt interior. It stands on delightful square legs and is just two inches in height.

As you would expect with a piece from such a well respected manufacturer as Aspreys, the quality and craftsmanship are superb.

The hallmarks and makers marks can be clearly seen in the photographs that are provided with this listing and we urge you to examine these carefully, along with all the other images, in order to satisfy yourself as to the quality and excellent condition of this lovely Asprey sterling silver box. There are no signs of any damage to the piece, it is in excellent condition with clear hallmarks and no dings, dents or signs of repair.

We always recommend that prospective purchasers of any antique silver piece should inspect the item that they are considering investing in personally if they possibly can and we recommend that you pay a visit to our north London showroom in order to see this fine silver mirror for yourself. Whilst you are in the showroom you will also be able to view many other items of antique silverware, tableware, cutlery and other sterling silver items.

It is advisable however, if you do intend to make a journey specifically to see this antique sterling silver novelty box to contact us before your visit in order to confirm that it is still available as it may have already have been reserved or sold. Please quote the item’s unique reference number, as shown above, when contacting us so that we know which of our many pieces you wish to discuss with us.

To view in person you are invited to visit our north London showroom which is open to the public on Monday to Friday between the hours of 10am and 5pm for you to view and inspect this silver box by Aspreys of Bond Street. We also open occasionally on Saturdays but you are advised to contact us before making a journey on a Saturday as we do not open every week and would not want you to have a wasted trip.

To discover more about this lovely antique silver jewellery box or novelty box and to ask any questions that you might have about this or any other item we are offering for sale, please contact us and talk to our in-house antiques experts by calling the number as shown above or by email if you prefer. When contacting us please have to hand the item reference, also shown above, so we can be sure about which item you are interested in.

This is a very much sought after and collectable item and we want it to reach you in the same, excellent condition that it leaves us in. It will require expert packing and transportation in order to ship it safely to your address. We can deliver this sterling silver stamp box to almost any location across the world and we will of course arrange the packing for you. However, before purchasing, please contact us for a shipping quotation so that we can fully understand and address your requirements. Please note that we deliver free of charge to mainland UK destinations.

If you are not satisfied with the item you receive, we offer a 14-day money back guarantee in accordance with the Distance Selling Regulations. You will be responsible for the return shipping fees for this sterling silver novelty box by Aspreys of bond Street unless we have inaccurately described it in some way and you do not receive the item as described. You must return the article in its original packaging and condition.

Other Asprey products include books, trophies and Asprey Polo. 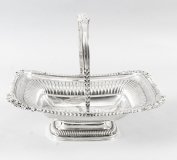 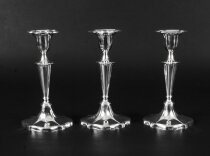