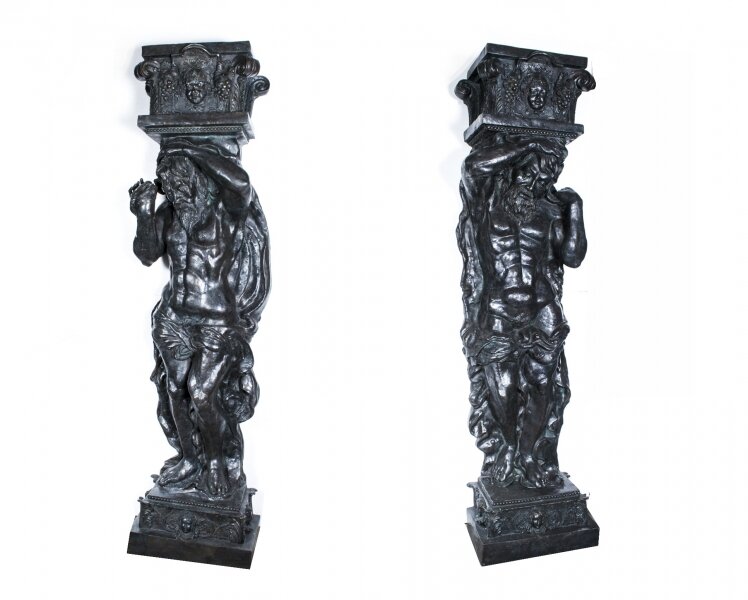 Ref: 07436
Price: £15,500.00
This is a monumental Neo Classical style pair of patinated Atlas figures as columns, dating from the last quarter of...
Question about item
Request a virtual viewing

This is a monumental Neo Classical style pair of patinated Atlas figures as columns, dating from the last quarter of the 20th century.

The columns depict classical bearded figures dressed in togos and sashes. They are supporting the capitals of the columns above their heads and they feature Bacchanalian cherubs and grapes with a pair of angels to each side, while standing on decorative bases which feature putti and ornamentation in high relief.

There is no mistaking the fine quality and charming design of these columns, which are going to make a superb addition to any entrance.

In classical European architecture, an atlas (also known as an atlant, or atlante oratlantid; plural atlantes) is a support sculpted in the form of a man, which may take the place of a column, a pier or a pilaster. The Roman term for such a sculptural support istelamon (plural telamones or telamons).

The term atlantes is the Greek plural of the name Atlas – the Titan who was forced to hold the sky on his shoulders for eternity. The alternative term, telamones, also is derived from a later mythological hero, Telamon, one of the Argonauts, who was the father of Ajax

The caryatid is the female precursor of this architectural form in Greece, a woman standing in the place of each column or pillar. Caryatids are found at the treasuries at Delphi and the Erechtheion on the Acropolis at Athens for Athene. They usually are in an Ionic context and represented a ritual association with the goddesses worshiped within.

Atlantes express extreme effort in their function, heads bent forward to support the weight of the structure above them across their shoulders, forearms often lifted to provide additional support, providing an architectural motif.

Atlantes and caryatids were noted by the Roman late Republican architect Vitruvius, whose description of the structures, rather than surviving examples, transmitted the idea of atlantes to the Renaissance architectural vocabulary..

Lost Wax Method - sometimes called by the French name of cire perdue or the Latin, cera perduta is the process by which a bronze or brass is cast from an artists sculpture. In industrial uses, the modern process is called investment casting. An ancient practice, the process today varies from foundry to foundry, but the steps which are usually used in casting small bronze sculptures in a modern bronze foundry are generally quite standardised.