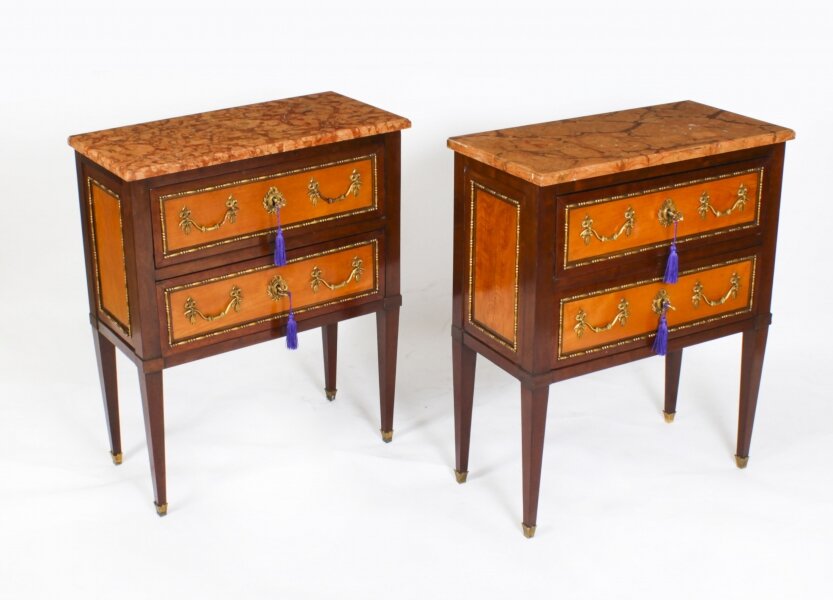 Ref: A2923
Price: £4,500.00
This is a gorgeous pair of antique Victorian marble topped satinwood and maple bedside commodes  dating from the mid 19th...
Question about item
Request a virtual viewing

This is a gorgeous pair of antique Victorian marble topped satinwood and maple bedside commodes  dating from the mid 19th century.

These two-drawer commodes are crafted from the most beautiful satinwood and maple and have solid oak lined drawers. To add extra opulence to this wonderful pair, each  has luxurious gilded ormolu mounts and handles.

They are surmounted with distinctive Rosso Carpazi marble tops and are raised upon square tapered legs with ormolu sabots.

Add a touch of elegance to a special room in your home with this superb pair of antique commodes.

In excellent condition having been beautifully cleaned and waxed in our workshops. As antique items, the commodes show minor signs of use commensurate with age, these minor condition issues are mentioned for accuracy and, as seen in the accompanying photographs, they display beautifully.
Please see photos for confirmation

More
Rosso Carpazi Marble is a material born out of the mountains of Albania. The brown-red ground mass of this beautiful marble is partially brecciated and quite rich. This natural stone exudes an element of passion and elegance and is ideal as a special piece on fine furnishings.