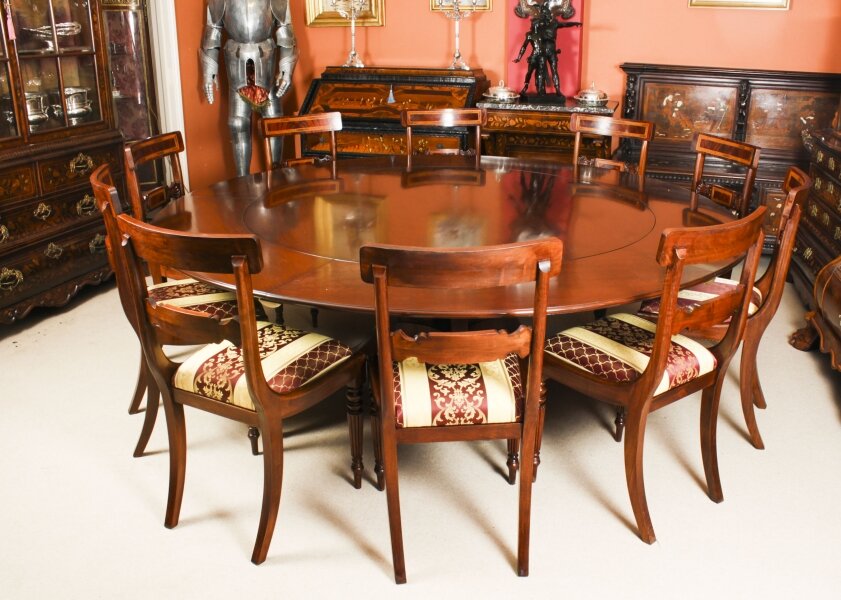 This is a beautiful Regency Revival dining set comprising a Jupe style dining table  by the renowned cabinet maker William Tillman, and a set of ten dining chairs, dating from the last quarter of the 20th Century.

The table has a solid mahogany top with five peripheral leaves that can be added around the circumference when required. It is raised on a square quadruple  swept sabre leg base  fitted with brass lion cappings and castors.

This table was purchased at great expense from the master cabinet maker William Tillman,  in Harrods, in the 1980s.

They all have drop in seats which are upholstered in a striking burgundy and gold fabric. The seat cushions can be removed to reveal  cane seats which allow for cooler and more comfortable dining in the warmer summer months.

There is no mistaking the fine craftsmanship of this handsome set, which is certain to become a treasured addition to your furniture collection, and a talking point with guests at meal times.

In excellent condition the table an chairs having been beautifully cleaned, polished waxed and reupholstered in our workshops, please see photos for confirmation.

William Tillman
William Tillman was making fine reproduction furniture from the1970's until his retirement at the end of the 1990's and his work is considered to be of the highest quality and collected throughout the world. It has been sold in all of the famous London Stores including Harrods,Peter Jones and Maples and will almost certainly be considered important antique furniture of the future.

Every piece of furniture was produced with the utmost skill and knowledge to ensure that the finished article would bear the most critical comparison with the original. Whilst the polish used was resistent to heat and water, the finished surface has a wax patination similar to that found on early furniture.

The Jupe table has now become one of the most valuable and sought after antiques. Original Jupe tables in good condition may sell for up to $350,000 at the time of writing. However, despite its popularity, the Jupe table has been very difficult to mass produce, because its workings are both extremely complex and entirely handcrafted.

For example, the frame structure that supports the table top sections in the Jupe table is comprised of many individual beam structures that are secured together to form the frame. Each of those beams must be individually made and assembled to exacting tolerances in order to ensure that the table top sections will move freely and mate in the center of the table top to form a substantially contiguous table surface in both the contracted and expanded configurations. The manufacture of such a structure is time-consuming and is not conducive to rapid production.

Other aspects of the Jupe table design also make the design difficult to implement. For example, in at least some of the existing examples of functioning Jupe tables, the pivot for the table top is a threaded rod that runs the entire length of the table pedestal. That is an extremely difficult and time-consuming configuration to replicate. 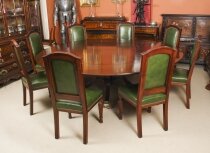