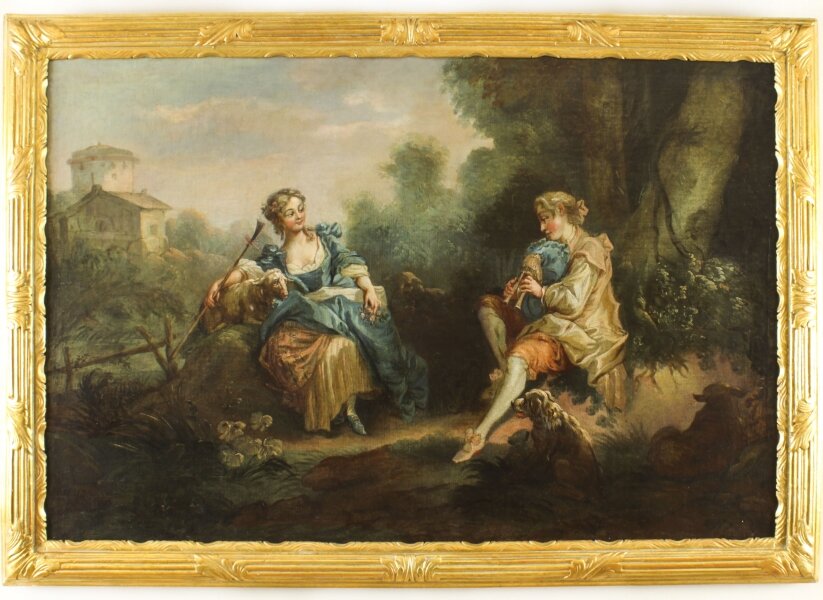 A beautiful French antique oil on canvas painting in the Manner of Jean-Antoine Watteau (1684-1721) 'The Serenade' dating from the early 19th century.

The delightful subject of the painting is a courting couple in a rugged country landscape with a large chateau in the background. The couple are seated in period costumes, while the gentleman serenades the lady.

Framed in its delightful original gilt frame, add this lovely period scene to your home.

More
Jean-Antoine Watteau
was baptised October 10, 1684 – died July 18, 1721) was a French painter and draughtsman whose brief career spurred the revival of interest in colour and movement, as seen in the tradition of Correggio and Rubens. He revitalized the waning Baroque style, shifting it to the less severe, more naturalistic, less formally classical, Rococo. Watteau is credited with inventing the genre of fêtes galantes, scenes of bucolic and idyllic charm, suffused with a theatrical air. Some of his best known subjects were drawn from the world of Italian comedy and ballet.

Jean-Antoine Watteau[n. 1] was born in October 1684 in Valenciennes, once an important town in the County of Hainaut which became sequently part of the Burgundian and Habsburg Netherlands until its secession to France following the Franco-Dutch War. He was the second of four sons born to Jean-Philippe Watteau (1660–1720) and Michelle Lardenois (1653–1727), and was presumed to be of Walloon descent.  The Watteaus were a quite well-to-do family, although Jean-Philippe, a roofer in second generation, was said to be given to brawling.  Showing an early interest in painting, Jean-Antoine may have been apprenticed to Jacques-Albert Gérin,  a local painter, and his first artistic subjects were charlatans selling quack remedies on the streets of Valenciennes.  Watteau left for Paris in 1702. After a period spent as a scene-painter, and in poor health, he found employment in a workshop at Pont Notre-Dame, making copies of popular genre paintings in the Flemish and Dutch tradition; it was in that period that he developed his characteristic sketchlike technique.

His drawings attracted the attention of the painter Claude Gillot, and by 1705 he was employed as an assistant to Gillot, whose work, influenced by those of Francesco Primaticcio and the school of Fontainebleau, represented a reaction against the turgid official art of Louis XIV's reign.  In Gillot's studio Watteau became acquainted with the characters of the commedia dell'arte (which moved onto the thé tre de la foire following the Comédie-Italienne departure in 1697), a favorite subject of Gillot's that would become one of Watteau's lifelong passions.

After a quarrel with Gillot, Watteau moved to the workshop of Claude Audran III, an interior decorator, under whose influence he began to make drawings admired for their consummate elegance. Audran was the curator of the Palais du Luxembourg, and from him Watteau acquired his knowledge of decorative art and ornamental design.  At the palace, Watteau was able to see the magnificent series of canvases painted by Peter Paul Rubens for Queen Marie de Medici. The Flemish painter would become one of his major influences, together with the Venetian masters that he would later study in the collection of his patron and friend, the banker Pierre Crozat.

During this period Watteau painted The Departing Regiment, the first picture in his second and more personal manner, showing influence of Rubens, and the first of a long series of camp pictures. He showed the painting to Audran, who made light of it, and advised him not to waste his time and gifts on such subjects. Watteau determined to leave him, advancing as excuse his desire to return to Valenciennes. He found a purchaser, at the modest price of 60 livres, in a man called Sirois, the father-in-law of his later friend and patron Edme-François Gersaint, and was thus enabled to return to the home of his childhood. In Valenciennes he painted a number of the small camp-pieces, notably the Camp-Fire, which was again bought by Sirois, the price this time being raised to 200 livres. 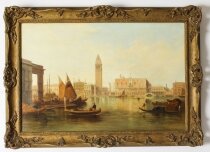 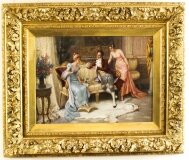