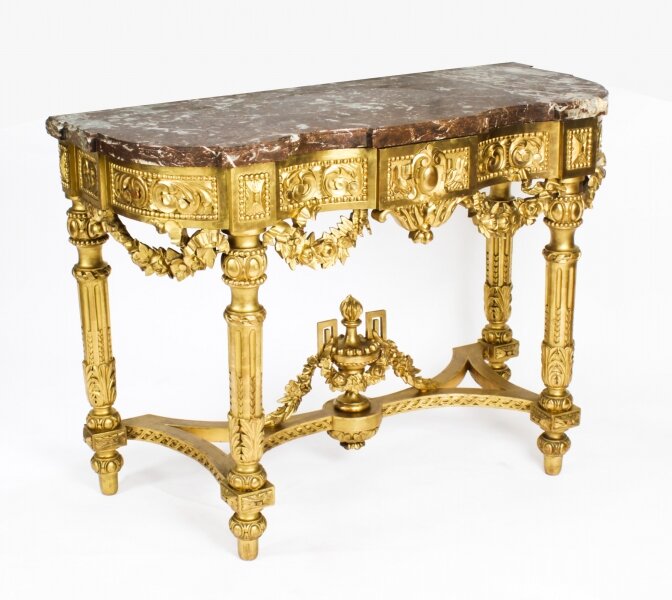 This finely carved giltwood console table is surmounted with an exquisite shaped rectangular Rouge de Rance marble top above a frieze carved with anthemion 'S' scrolls and beading with drapery swags below. This is splendidly supported by four turned and fluted legs that are united by a stretcher that ha been centred with a goldedn urn.

This piece is truly unique and is guaranteed to bring beauty and charm to your home for many years to come.

Rouge de Rance
is a  red marble from the town of Rance in the province of Hainaut Belgium.

The red "marble" of Rance was very popular as a prestigious building material for decorative use. Although it has been exploited since Roman Antiquity it became most renowned since the 17th century because of its prolific use in the Royal Chateau of Versailles built for the French king Louis XIV. Large quantities were used for the most prestigious parts of the building, including the interior wall decoration of the "Galerie des Glaces" and the columns of the main portico on the "Cour des Marbres". To satisfy the vast demand needed for Versailles and other French royal residences a new quarry was opened and subsequently named "Trou de Versailles"

Since the 18th century "Rouge de Rance" was also very popular as a material for fireplaces and clocks, and as a top for furniture such as commodes.

The exploitation of the quarries in Rance stopped in the 1950s. A museum on Belgian Marbles was opened in Rance in 1979.