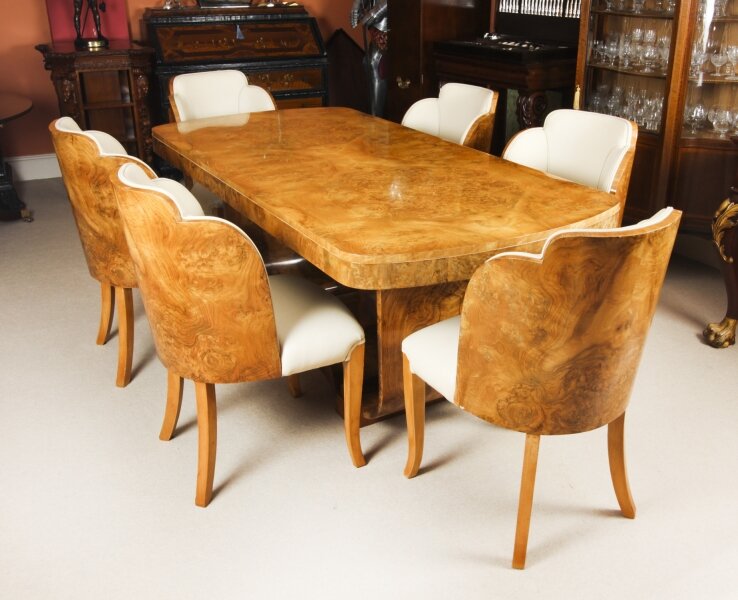 The rectangular shaped table has a stunning burr walnut figured top with rounded corners and stands on a decorative U-shaped base. The set of six chairs are the highly desirable cloud back model, and comprises six side chairs, all with curved backs that show the figured grain of the burr walnut beautifully, and they are all upholstered in cream leather.

This set is a fabulous example of the Art Deco period and will enhance any room in which it is placed.

More
Lawrie Gatehouse (1943 - 2020)
was an avid collector of Art Deco and posters, drawn to the printed medium through his primary love of the golden age of steam and travel.
In his professional life, Lawrie was a mechanical engineer who founded Process Systems International, a successful engineering firm in Northampton in 1992. Another of his lifelong passions was drag racing, after getting hooked at the Blackbushe DragFest in 1964. He consequently spent over 50 years committed to the sport.
He loved the innovative streamlined style, the bright colours and the flamboyance of the age.  But, above all, he admired the skill and exquisite craftsmanship - the like of which he felt would not be seen again.
Lawrie’s collection of 1920’s posters showed his engineering background and his enjoyment of travel.  He had an extensive knowledge of cars, boats and planes but his love for anything with an engine came second to his love of Art Deco.
Lawrie was an avid reader and he studied countless books about the leading designers of that time.

Epstein furniture
was originally founded in East London by Polish immigrants in the 1890s. The firm passed to brothers Harry and Lou Epstein and the pair turned their attention to the production of Art Deco forms from the 1930s until the 1950s.

Finished to high standards, most pieces were custom-made in veneers of burr maple, sycamore or walnut. The design of the famous ‘cloud’ seat furniture is credited to Epstein and the company also popularized the uniquely British taste in suite furniture.

Following World War II, Epstein had showrooms in London, Manchester and Glasgow. A conservative Art Deco style became the company`s trademark after the war and most pieces were made from bleached walnut. Art Deco pieces are not signed.


Art Deco or Deco,
is an influential visual arts design style which first appeared in France during the 1920s, flourished internationally during the 30s and 40s. 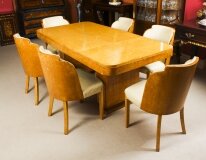