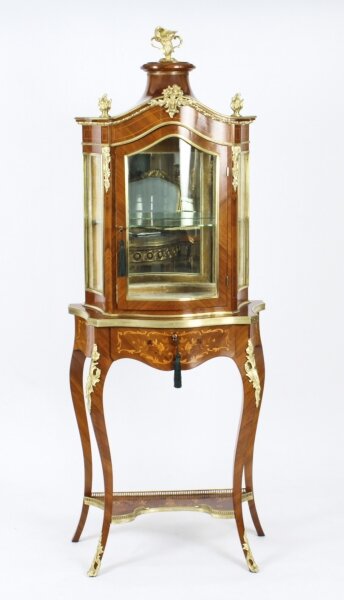 Ref: A2086
Price: £3,850.00
This is a beautiful antique French Louis Revival kingwood, marquetry and ormolu mounted display cabinet, circa 1870 in date....
Question about item
Request a virtual viewing

This is a beautiful antique French Louis Revival kingwood, marquetry and ormolu mounted display cabinet, circa 1870 in date.

This beautiful cabinet has an abundance of exquisite ormolu mounts as well as intricate inlaid floral and foliate marquetry decoration.

It has shaped glass to the front and sides, is mirrored on the back with a central glass shelf and stands on elegant slender cabriole legs untied by a marquetry undertier.

It is surmounted with an exquisite ormolu mount and it will add a touch of unparalleled style to your home. It is perfect for displaying your best silver or porcelain.


Ormolu
(from French 'or moulu', signifying ground or pounded gold) is an 18th-century English term for applying finely ground, high-carat gold in a mercury amalgam to an object of bronze.The mercury is driven off in a kiln leaving behind a gold-coloured veneer known as 'gilt bronze'.