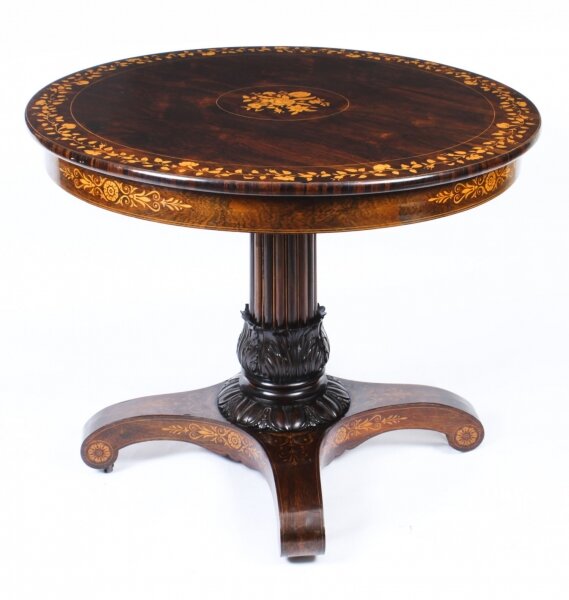 Ref: A1757
Price: £2,950.00
This is an elegant antique Charles X circular Gonçalo Alves centre table, circa 1830 in date. The table is exquisitely...
Question about item
Request a virtual viewing

This is an elegant antique Charles X circular Gonçalo Alves centre table, circa 1830 in date.

The table is exquisitely crafted and features wonderful inlaid floral and foliate marquetry decoration of the highest quality.

It is raised on a beautiful reeded centre column and a sumptuous square base with decorative scroll toe and superb marquetry decoration. The attention to detail is truly unique and this table is a fine example of the French master craftsman's work.


Add an elegant touch to your home with this exceptional piece of antique French furniture.

Charles X
Charles Philippe; 9 October 1757 – 6 November 1836, was known for most of his life as the Count of Artois before he reigned as King of France from 16 September 1824 until 2 August 1830.  An uncle of the uncrowned King Louis XVII, and younger brother to reigning Kings Louis XVI and Louis XVIII, he supported the latter in exile and eventually succeeded him. His rule of almost six years ended in the July Revolution of 1830, which resulted in his abdication and the election of Louis Philippe, Duke of Orléans, as King of the French. Exiled once again, Charles died in Gorizia, then part of the Austrian Empire.
The reign of Charles X  is closely linked to the decorative style that carries his name. Furniture kept the heavy aspect it acquired during the Empire period, yet forms became suppler and lighter following the romantic trend and a renewed passion for the Gothic period. Society was also changing as the king no longer incarnated the taste to observe; now, decorative arts adapted themselves to the demands of the new bourgeois population.
The art of marquetry returned with decorative flowers, garlands and rosettes.
Many combinations of wood were used like burr ash or elm, maple, satin wood, sycamore, walnut were contrasted with types of rosewood, mahogany, ebony. Curved lines in furniture began to reappear. 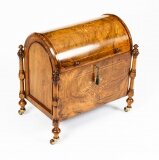