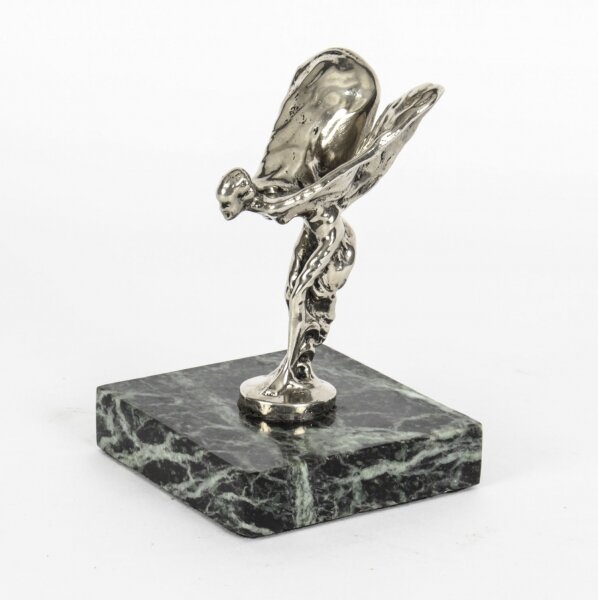 The winged maiden was designed by Charles Robinson Sykes (1875-1950), and she stands on an attractive square verde antico marble plinth base.

It is a striking piece which will look amazing on your desk.

More
The Spirit of Ecstasy is the bonnet ornament on Rolls-Royce cars. It is in the form of a woman leaning forwards with her arms outstretched behind and above her. Billowing cloth runs from her arms to her back, resembling wings.
The Spirit of Ecstasy, also called "Emily", "Silver Lady" or "Flying Lady", was designed by English sculptor Charles Robinson Sykes and carries with it a story about secret passion between John Walter Edward Douglas-Scott-Montagu, (second Baron Montagu of Beaulieu after 1905, a pioneer of the automobile movement, and editor of The Car Illustrated magazine from 1902) and the model for the emblem, Eleanor Velasco Thornton. Eleanor (also known as Thorn) was the secretary of John Walter, who fell in love with her in 1902 when she worked for him on the aforesaid motoring magazine. Their secret love was to remain hidden, limited to their circle of friends, for more than a decade. The reason for the secrecy was Eleanor's impoverished social and economic status, which was an obstacle to their love. On the other hand, Montagu was married to Lady Cecil Victoria Constance Kerr since 1889.
Eleanor died on 30 December 1915 when the SS Persia was torpedoed by a U-boat south of Crete. She had been accompanying Lord Montagu who had been directed to assume a command in India. He was thought to have been killed too, but survived and was saved after several days adrift in a life raft.