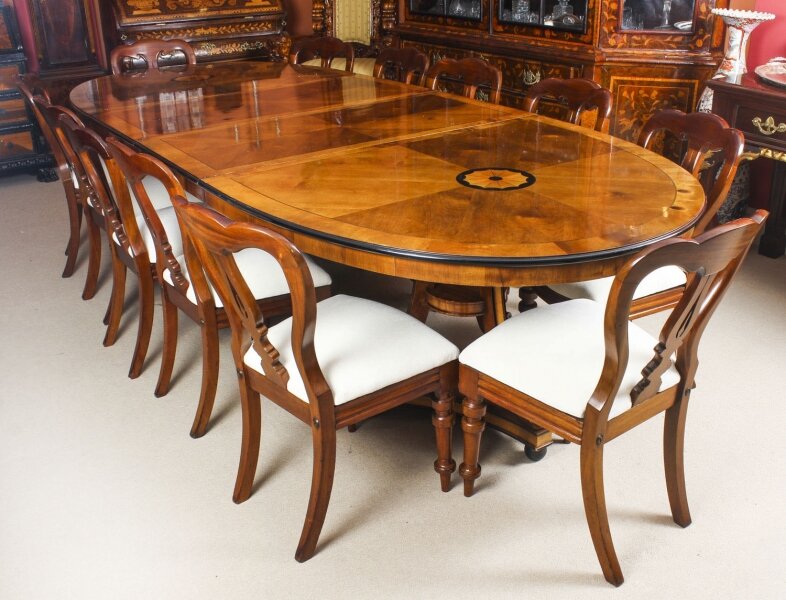 The oval top with inlaid circular satinwood and ebonised shell marquetry decoration at each end, with two additional leaves, that can be added or removed a required to suit the occasion, it can comfortably seat twelve people.

It is raised on a pair of incurved triform bases with scroll supports on ball feet.

The  set of twelve antique English  Victorian spoon back dining chairs  date from Circa 1870.

The set comprises twelve sidechairs  all masterfully crafted in beautiful solid mahogany. They each have elegant spoon backs and are raised on stylish hand carved turned tapering legs,  with stuff over removable drop in seats that have been reupholstered in a sumptuous cream fabric.

In excellent condition having been beautifully cleaned and waxed and the chairs reupholstered in our workshops, please see photos for confirmation.

is a fine grained and light coloured hardwood often used in Victorian pieces of antique furniture. When Victorian cabinet makers used to cut birch on an angle this made a very unusual grain and this grain was known as tiger or zebra stripes, this is how satin birch got it’s name. 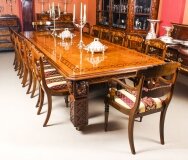 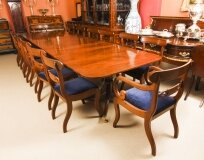