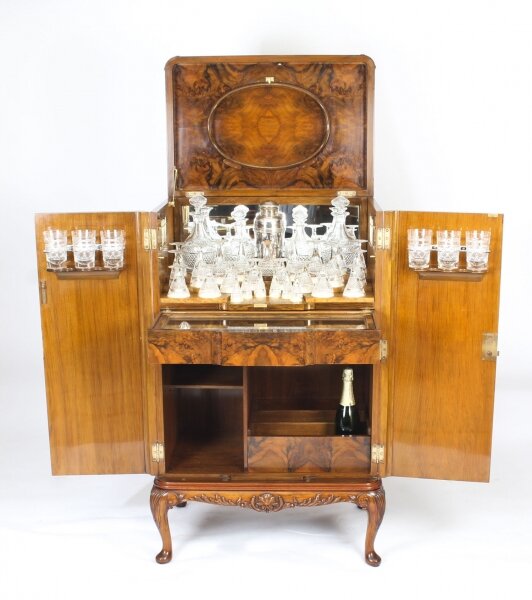 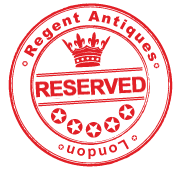 Ref: A1373
Price: £ 0.00
This fantastic vintage 1950's burr walnut cocktail cabinet with the original cut glass ware bears the label of the World...

This item has been reserved but we have thousands of items in our warehouse that are not online.

The beautifully figured burr walnut cabinet has a fully fitted fitted interior enclosed by a hinged lift-lid and a pair of panel doors. It is raised on short cabriole legs terminating in pad feet.

The pair of doors are fitted with small shelves with brass galleries on the inside for glasses. The top  opens to reveal an interior which has four cut glass decanters, a cocktail shaker, and a selection of cut glass glasses.

Below is a handy drawer for cocktail equipment  containing a lemon squeezer, a measuring cup for spirits, ice tongs, a bottle stopper, mixing spoons and a spirit dispenser.

Below the fitted drawer is a small cupboard with a cenral shelf and a section for bottles.

This cocktail cabinet would be a wonderful and playful addition to your lounge or family room and is sure to get noticed wherever it is placed.

In excellent condition having been beautifully  cleaned, polished and waxed in our workshops, please see photos for confirmation.
There is one replaced glass.