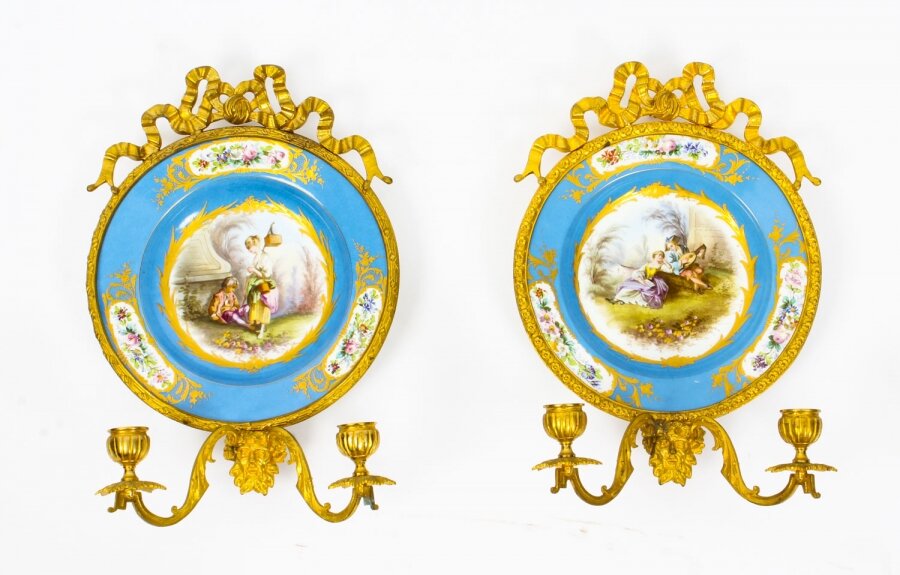 Ref: A1299
Price: £2,550.00
This is a stunning Antique pair of Sevres porcelain and ormolu wall lights,  Circa 1870 in date.   They each feature an...
Question about item
Request a virtual viewing

This is a stunning Antique pair of Sevres porcelain and ormolu wall lights,  Circa 1870 in date.

They each feature an elegant classical frame topped with a ribbon crest with a satyr mask below and featuring upturned scrolling acanthus two branch arms with foliate cast sconces.

They feature inset hand painted porcelain panels depicting scenes of couples in Arcadian landscapes scenes each on a stunning bleu celeste ground with gilt highlights. On the reverse they bear the interlaced A's marks for Sevres and the printed marks 'S. 27'


There is no mistaking their unique quality and design and they will soon instantly enhance the style of one special room in your home.

In really excellent condition with no chips, cracks or signs of repair, please see photos for confirmation of condition.

About the time when Napoleon Bonaparte named himself Emperor of France (1804), a new director was named for the Sevres Porcelain Manufactory. Alexandre Brongniart, highly educated in many fields, resurrected Sevres Porcelain. Soft-paste porcelain was eliminated altogether thanks to the earlier discovery of kaolin near Limoges. For four decades until his death, Brongniart presided over monumental progress for Sevres Porcelain, catering not only to Napoleon himself but at last to include the more financially profitable mid-priced market in the emerging middle class.