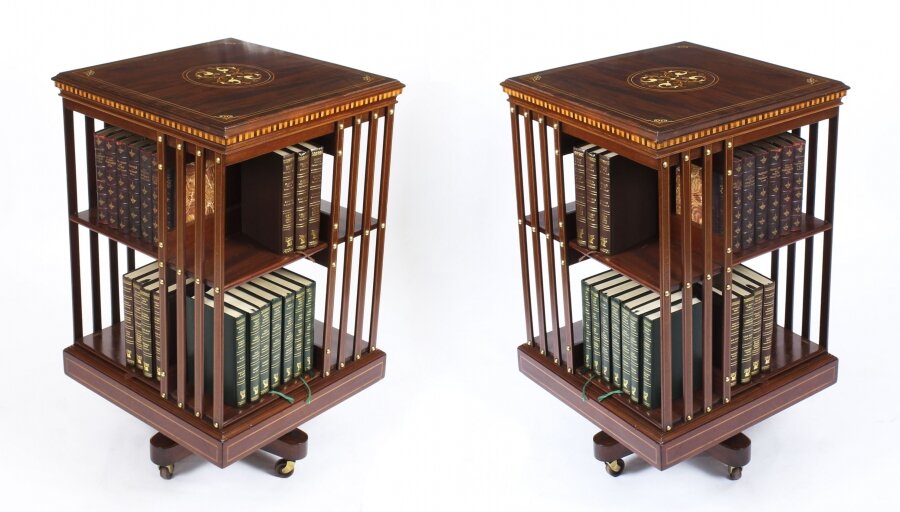 Ref: A1212
Price: £ 0.00
This is an exquisite pair of antique Edwardian marquetry inlaid flame mahogany revolving bookcases, circa 1900 in date. These...

This is an exquisite pair of antique Edwardian marquetry inlaid flame mahogany revolving bookcases, circa 1900 in date.

These exquisite revolving bookcases are made of beautiful solid mahogany and the square tops have been masterfully inlaid with elaborate mythical dolphins and foliate scroll decoration within splendid ivorine and boxwood stringing.
They each feature revolving compartments for books, with the shelves and supporting slats being held by elegant brass studs. The slats and the splendid plinth base have matching boxwood stringings.
They revolve on solid cast iron cross-platform bases that are raised on ceramoc castors. The best quality Edwardian revolving bookcases had cast iron bases, as this meant that they would be sturdy and not tip when full of books, whereas the lesser versions had simple wooden bases.
The quality and attention to detail throughout are second to none.

The flame figure in the wood is revealed by slicing through the face of the branch at the point where it joins another element of the tree.
Marquetry
is decorative artistry where pieces of material (such as wood, mother of pearl, pewter, brass silver or shell) of different colours are inserted into surface wood veneer to form intricate patterns such as scrolls or flowers.