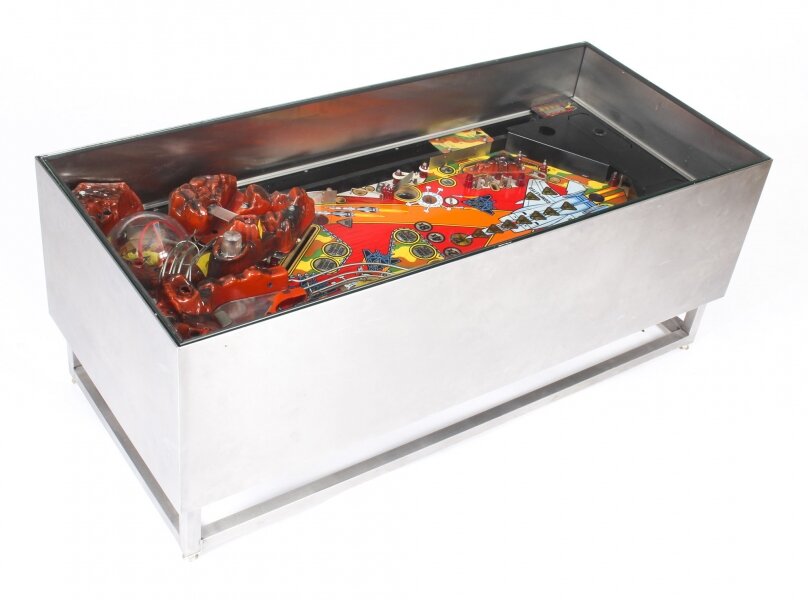 Ref: A1002
Price: £1,750.00
This is an original Operation: Thunder by Premier/Gottlieb pinball machine that was cleverly converted into a coffee table,...
Question about item
Request a virtual viewing

This is an original Operation: Thunder by Premier/Gottlieb pinball machine that was cleverly converted into a coffee table, the pinball components dating from the late 20th Century.

The colourful coffee table is rectangular in shape and made of stylish brushed steel with a glass top.
The internal components light up with a battery, making this piece of furniture truly jovial and entertaining.
This pinball coffee table is both practical and amusing and a perfect addition to any games room or lounge.

Gottlieb (formerly D. Gottlieb & Co.) was an American arcade game corporation based in Chicago, Illinois. The main office and plant were located at 1140-50 N. Kostner Avenue until the early 1970s when a new modern plant and office was located at 165 W. Lake Street in Northlake, IL. A subassembly plant was located in Fargo, ND. The company was established by David Gottlieb in 1927, initially producing pinball machines while later expanding into various other games including pitch-and-bats, bowling games, and eventually video arcade games (notably Reactor and Q*bert and, leading to the demise of Mylstar).

Like other manufacturers, Gottlieb first made mechanical pinball machines, including the first successful coin-operated pinball machine Baffle Ball in 1931. Electromechanical machines were produced starting in 1935. The 1947 development of player-actuated, solenoid-driven 2-inch bats called "flippers" revolutionized the industry. Players now could shoot the ball back up the playfield and get more points. The flippers first appeared on a Gottlieb game called Humpty Dumpty, designed by Harry Mabs. By this time, the games also became noted for their artwork by Roy Parker.

In the late 1950s, the company made more widespread use of digital score reels, making multiple player games more practical as most scoring was expressed by cluttered series of lights in the backbox. The score reels eventually appeared on single-player games, now known as "wedgeheads" because of their distinctive tapering back box shape. By the 1970s the artwork on Gottlieb games was almost always by Gordon Morison, and the company had begun designing their games with longer 3-inch flippers, now the industry standard.

The company made the move into solid-state machines starting in the late 1970s. The first few of these were remakes of electromechanical machines such as Joker Poker and Charlie's Angels. By that time, multiple player machines were more the mode and wedgeheads were no longer being produced. The last wedgehead was T.K.O. (1979) and the last single-player machine was Asteroid Annie and The Aliens (1980).

Gottlieb was bought by Columbia Pictures in 1976. In 1983, after the Coca-Cola Company had acquired Columbia, Gottlieb was renamed Mylstar Electronics, but this proved to be short-lived. By 1984 the video game industry in North America was in the middle of a shakeout and Columbia closed down Mylstar at the end of September 1984. A management group, led by Gilbert G. Pollock, purchased Mylstar's pinball assets in October 1984 and continued the manufacture of pinball machines under a new company, Premier Technology. As a result of this several prototype Mylstar arcade games, which were not purchased by the investors, were never released. Premier did go on to produce one last arcade game, 1989's Exterminator. Premier Technology, which returned to selling pinball machines under the name Gottlieb after the purchase, continued in operation until the summer of 1996. 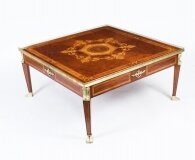