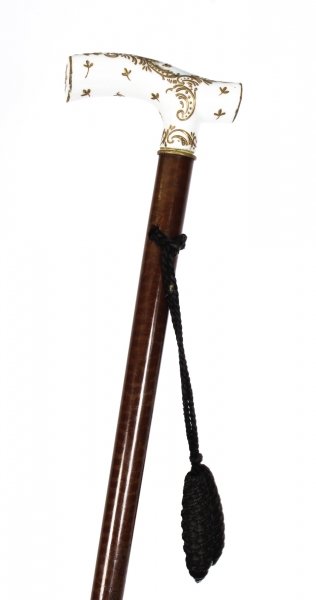 Ref: 09942
Price: £525.00
This is a magnificent and decorative antique German hand-painted porcelain mounted  walking cane, circa 1880 in date.   This...
Question about item

This is a magnificent and decorative antique German hand-painted porcelain mounted  walking cane, circa 1880 in date.

This splendid walking cane has a superb tau shaped hand-painted porcelain handle in the manner of Messein porcelain featuring a beautifully dressed woman holding flowers among a naturalistic landscape within a detailed gilt frame with foliate motifs.
The sturdy and very fine hardwood tapering shaft is complete with its original and highly attractive wrist grasp as well as the silvered ferrule for ease of use.
It is a truly lovely item which exudes the utmost in elegance and distinguished style and as such would be appreciated by any collector of walking canes.

Meissen porcelain or Meissen china was the first European hard-paste porcelain. Early experiments were done in 1708 by Ehrenfried Walther von Tschirnhaus. After his death that October, Johann Friedrich Böttger continued von Tschirnhaus's work and brought porcelain to the market, financed by Augustus the Strong, King of Poland and Elector of Saxony. The production of porcelain in the royal factory at Meissen, near Dresden, started in 1710 and attracted artists and artisans to establish, arguably, the most famous porcelain manufacturer known throughout the world. Its signature logo, the crossed swords, was introduced in 1720 to protect its production; the mark of the swords is reportedly the one of the oldest trademarks in existence. In English Dresden porcelain was once the usual term for these wares, especially the figures; this is due to the fact that Meissen is geographically not far from Dresden and is the Saxon capital.

Part of a tea and chocolate service, c. 1725, given to Vittorio Amadeo II, King of Sardinia (1666-1732) by Augustus the Strong, owner of the Meisssen factory

Meissen remained the dominant European porcelain factory, and the leader of stylistic innovation, until somewhat overtaken by the new styles introduced by the French Sèvres factory in the 1760s, but has remained a leading factory to the present day. Among the developments pioneered by Meissen are the porcelain figurines, and the introduction of European decorative styles to replace the imitation of Asian decoration of its earliest wares.