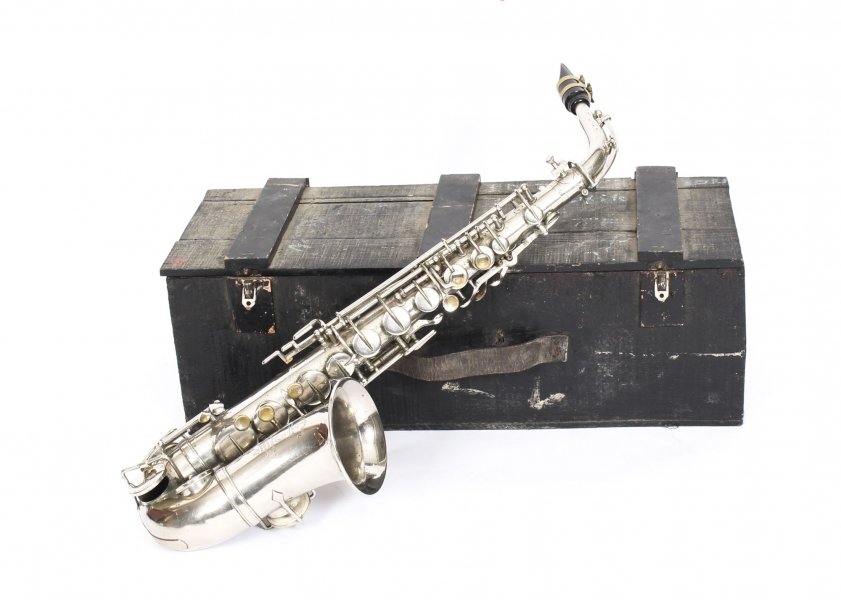 Ref: 09923
Price: £ 0.00
This is a splendid and rare antique French silver plated saxophone with the original playing booklet by the world-famous...

This is a splendid and rare antique French silver plated saxophone with the original playing booklet by the world-famous manufacturer of musical instruments, Couesnon et Cie,  and dating from 1929.
Distinctively made of silver-plate, as compared to the more common brass versions, this truly impressive musical instrument has a single-reed mouthpiece similar to that of the clarinet and its various covering holes in the straight conical body tube to control the resonant frequency.  It features its typical splendid flared bell at the end opposite the mouthpiece. At rest, some keys are open and some are closed, as they should be.
It is engraved:
'Exposition Univerelle De Paris 1900
HCRS Concours membre du jury
COUESNON & CIE.
Fournisseurs De L'Armee
94, Rue D'Angouleme
Paris'

It bears the registration number '195'.
It comes with its original and charming playing booklet as well as two reeds in their authentic original wooden box which is stamped 'Henry Selmer Paris'.
This wonderful and decorative silver-plated saxophone is sure to enhance the decor of your home.

In excellent condition, please see photos for confirmation. As an antique item, the piece shows signs of use commensurate with age, these minor condition issues are mentioned for accuracy and, as seen in the accompanying photographs, the saxophone displays beautifully.

The saxophone (referred to colloquially as the sax) is a woodwind instrument. Saxophones are usually made of brass and played with a single-reed mouthpiece similar to that of the clarinet. Although most saxophones are made from brass, they are categorized as woodwind instruments, because the sound is produced by an oscillating reed, traditionally made out of woody cane, rather than lips vibrating in a mouthpiece cup as with the brass instrument family. As with the other woodwind instruments, the pitch of the note being played is controlled by covering holes in the body tube to control the resonant frequency of the air column by changing the effective length of the tube.

The saxophone is used in classical music (such as concert bands, chamber music, solo repertoire, and, occasionally, orchestras), military bands, marching bands, jazz (such as big bands and jazz combos), and contemporary music. The saxophone is also used as a solo and melody instrument or as a member of a horn section in some styles of rock and roll and popular music. Saxophone players are called saxophonists.

Since the first saxophone was invented by the Belgian instrument maker Adolphe Sax in the early 1840s, saxophones have been produced in a variety of series distinguished by transpositions within instrument sets and tuning standard. Sax patented the saxophone on 28 June 1846, in two groups of seven instruments each. Each series consisted of instruments ranked by pitch, in alternating transposition. The series pitched in B♭ and E♭ soon became dominant and most saxophones encountered today are from this series. Instruments from the series pitched in C and F never gained a foothold and constituted only a small percentage of instruments made by Sax. High Pitch (also marked "H" or "HP") saxophones tuned sharper than the (concert) A = 440 Hz standard was produced into the early twentieth century for sonic qualities suited for outdoor uses, but are not playable to modern tuning and are considered obsolete. Low Pitch (also marked "L" or "LP") saxophones are equivalent in tuning to modern instruments. C soprano and C melody saxophones were produced for the casual market as parlour instruments during the early twentieth century. Saxophones in F were introduced during the late 1920s but never gained acceptance. The modern saxophone family consists entirely of instruments in the B♭ – E♭ series, historical and experimental instruments notwithstanding. The saxophones with widest use and availability are the soprano, alto, tenor, and baritone saxophones.

Couesnon has been in business for over 170 years. The Couesnon company was started in 1827, outside of Paris. Cousenon was located in Paris in 1882 by Amedee Couesnon the son-in-law of Gautrot Aine. In 1883, it was called Couesnon, Gautrot et Cie, and from 1888, Couesnon et Cie. By 1896 they had a workforce of 200
By 1911, Couesnon had expanded to eleven factories and more than 1000 workers. During this time the products were highly sought after and were played by many virtuosos. A 1913 catalogue lists the models from best to worst: Modele Monopole, Opera AN, Armee BN, Armee GNM, Cantional BO, Universel CGO, and Model SO.
Note the "pineapple" or "Grenade" at the bottom of the logo. When this is present, the number on the side of the design is the year of manufacture.
But, by 1927 they were down to a workforce of 200.
During the 1930s they began catering to marching brass bands, and gradually became almost the only supplier of marching brass instruments in France. They made many horns which were imported into the United States, including many that were sold under the names of music stores and other private labels.
At the end of World War II, the music business started to change, but Couesnon continued to deal primarily with the special needs and instruments of brass and military bands. Starting in the 60 s and during the next 20 years, Couesnon tried to expand its share in markets other than marching bands. They made a line called Monopole Conservatoire of higher quality instruments, but their marketing proved ineffective and factories were sold off and in 1969 the main factory was badly damaged by fire, destroying the archives. The fire resulted in the loss of all the company records, including those which would make it possible to determine the year of manufacture from the serial number. In 1978, the contract with Gretch to import Couesnon instruments to the United States was terminated and new Couesnon instruments have been very rare in the US since that time.
Today the company has only 25 employees working in its sole shop. In 1999, the French drum maker P.G.M. bought the name, the tooling, and the factory to give it new life. The company is now known as P.G.M. Cousenon. Their most popular products are hunting horns and tambour drums mainly for the French market. Unfortunately all the mandrels and tooling needed for the making of C, Bb and piccolo trumpets had been stolen, so the workshop is making only brass band instruments, such as the flugelhorn, cornet, tuba, a true French French horn, with piston valves and extended stems for left-hand operation, hunting horns, and a natural trumpet (Jeanne of Arc model) and military bugles, bass bugles, cavalry trumpets.
The company is now a very small family-owned business whose ownership is found in the company's name, P.G.M. comes from the family name Planson. They have two daughters Sophie and Isabelle. Sophies married name which is Glace. Isabelles married name which is Moret. The company is all situated in one building, containing office, manufacturing, storage, and lacquering. Only silver-plating and case making are done elsewhere. Production facilities are old-fashioned and the employees are skilled hand craftsmen. All of the Couesnon instruments are handmade. They make three flugelhorn models, 137 Tradition, which is the small one, 142 Monopole, and 144 which is the 4 valve version. Production of flugelhorns is about 50-60 a year.
An important part of the engraving is the small number (in a circle, or pineapple) which often follows the words on the bell. This indicates the last two digits of the year made
The Triebert workshop was established in Paris in 1810, but they were primarily oboe makers, and are credited for being primarily responsible for the development of the modern oboe. The company went into bankruptcy in 1881 and was bought by Gautrot Aine, who in turn was bought out by Couesnon.
It is likely that any brass instruments with the Triebert name are actually Couesnon. Couesnon is known to have used the Triebert tradename into the 30s.
More 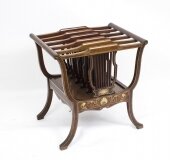