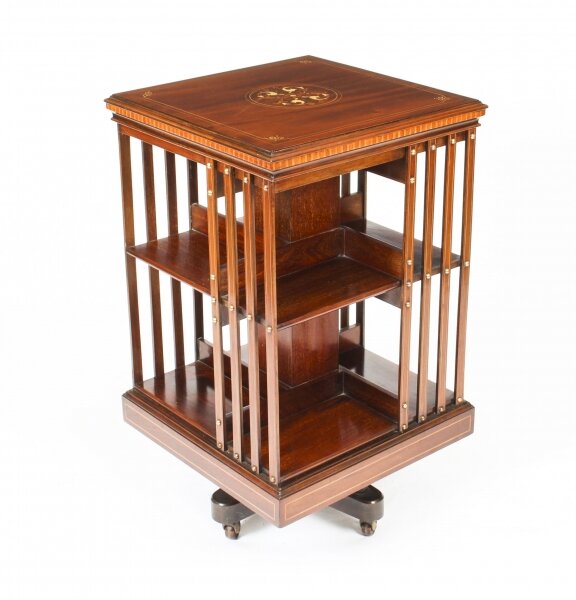 Ref: 09849
Price: £ 0.00
This is an exquisite antique Edwardian marquetry inlaid mahogany square revolving bookcase, circa 1900 in date. This exquisite...

This is an exquisite antique Edwardian marquetry inlaid mahogany square revolving bookcase, circa 1900 in date.

This exquisite revolving bookcase is made of beautiful solid mahogany and the top has been masterfully inlaid with elaborate mythical sea beasts and scroll ornaments within splendid ivorine and boxwood stringings.
It features useful revolving compartments for books with the shelves and supporting slats being held by elegant brass studs. The slats and the splendid plinth base have matching boxwood stringings.
It revolves on a solid cast iron cross-platform base. The best quality Edwardian revolving bookcases had cast iron bases, as this meant that they would be sturdy and not tip when full of books, whereas the lesser versions had simple wooden bases.
The quality and attention to detail throughout are second to none.

Techniques of wood marquetry were developed in Antwerp and other Flemish centers of luxury cabinet-making during the early 16th century. The craft was imported full-blown to France after the mid-seventeenth century, to create furniture of unprecedented luxury being made at the royal manufactory of the Gobelins, charged with providing furnishings to decorate Versailles and the other royal residences of Louis XIV. Early masters of French marquetry were the Fleming Pierre Golle and his son-in-law, André-Charles Boulle, who founded a dynasty of royal and Parisian cabinet-makers (ébénistes) and gave his name to a technique of marquetry employing shell and brass with pewter in arabesque or intricately foliate designs.
More
More