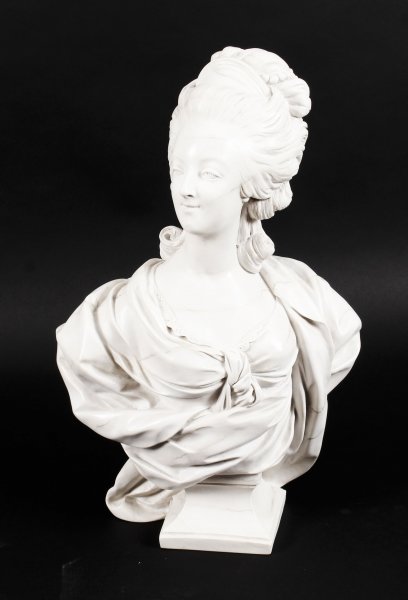 This is a beautifully sculpted composite marble bust of the famous  Marie Antoinette, late 20th century in date.
This attractive sculpture features the Queen of France facing to dexter, wearing a regal diadem and pearls in her hair. She also wears a sumptuous drapery around the shoulders.
It is raised on an integrally carved square spreading base.
This high-quality bust is made from marble dust or artificial marble.

More
Marble dust
is combined with cement or synthetic resins to make reconstituted or cultured marble. The appearance of marble can be simulated with faux marbling, a painting technique that imitates the stone's colour patterns.

Marie Antoinette born Maria Antonia Josepha Johanna; 2 November 1755 – 16 October 1793) was the last Queen of France before the French Revolution. She was born an Archduchess of Austria and was the penultimate child and youngest daughter of Empress Maria Theresa and Francis I, Holy Roman Emperor. She became Dauphine of France in May 1770 at age 14 upon her marriage to Louis-Auguste, heir apparent to the French throne. On 10 May 1774, her husband ascended the throne as Louis XVI and she assumed the title Queen of France and Navarre, which she held until September 1791, when she became Queen of the French as the French Revolution proceeded, a title that she held until 21 September 1792.

After eight years of marriage, Marie Antoinette gave birth to Marie Thérèse, the first of her four children. A growing percentage of the population came to dislike her, accusing her of being profligate and promiscuous and of harbouring sympathies for France's enemies, particularly her native Austria. The Affair of the Diamond Necklace damaged her reputation further. During the Revolution, she became known as Madame Déficit because the country's financial crisis was blamed on her lavish spending and her opposition to the social and financial reforms of Turgot and Necker.

Several events were linked to Marie Antoinette during the Revolution after the government had placed the royal family under house arrest in the Tuileries Palace in October 1789. The June 1791 attempted flight to Varennes and her role in the War of the First Coalition had disastrous effects on French popular opinion. On 10 August 1792, the attack on the Tuileries forced the royal family to take refuge at the Assembly, and they were imprisoned in the Temple Prison on 13 August. On 21 September 1792, the monarchy was abolished. Her trial began on 14 October 1793, and two days later Marie Antoinette was convicted by the Revolutionary Tribunal of high treason and executed by guillotine on the Place de la Révolution.