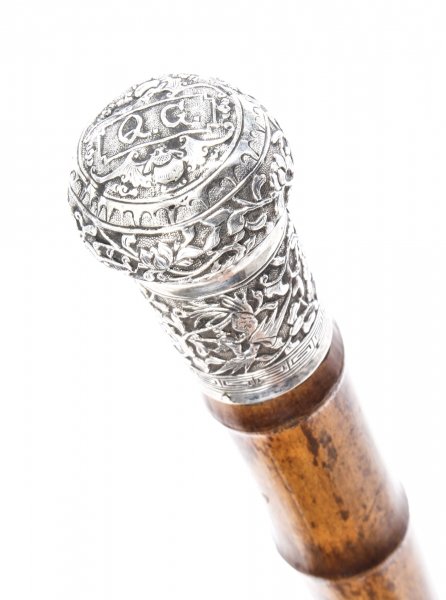 This is a beautiful antique Chinese gentleman's silver pommel walking stick, circa 1880 in date.


This decorative walking cane features an exquisite Chinese silver pommel decorated with exquisitely chased blossoming flowers including lotus and peonies and fanciful birds all above a Greek key border. The top of the handle bears the initials Q.G. framed by two bats on a rectangular cartouche.

The attractive and sturdy bamboo shaft is complete with its original ferrule.

Add an extravagate element to your daily life with this wonderful walking cane.

The bamboos are evergreen perennial flowering plants in the subfamily Bambusoideae of the grass family Poaceae. Bamboo, like true wood, is a natural composite material with a high strength-to-weight ratio useful for structures.

In its natural form, bamboo as a construction material is traditionally associated with the cultures of South Asia, East Asia, and the South Pacific, to some extent in Central and South America, and by extension in the aesthetic of Tiki culture.

Bamboo was in widespread use in early China as a medium for written documents. The earliest surviving examples of such documents, written in ink on string-bound bundles of bamboo strips (or "slips"), date from the 5th century BC during the Warring States period. However, references in earlier texts surviving on other media make it clear that some precursor of these Warring States period bamboo slips was in use as early as the late Shang period (from about 1250 BC).

In Chinese culture, the bamboo, plum blossom, orchid, and chrysanthemum are collectively referred to as the Four Gentlemen. These four plants also represent the four seasons and, in Confucian ideology, four aspects of the junzi ("prince" or "noble one"). The pine, the bamboo, and the plum blossom are also admired for their perseverance under harsh conditions, and are together known as the "Three Friends of Winter" in Chinese culture. The "Three Friends of Winter" is traditionally used as a system of ranking in Japan, for example in sushi sets or accommodations at a traditional ryokan. Pine is of the first rank, bamboo is of second rank, and plum is of the third.