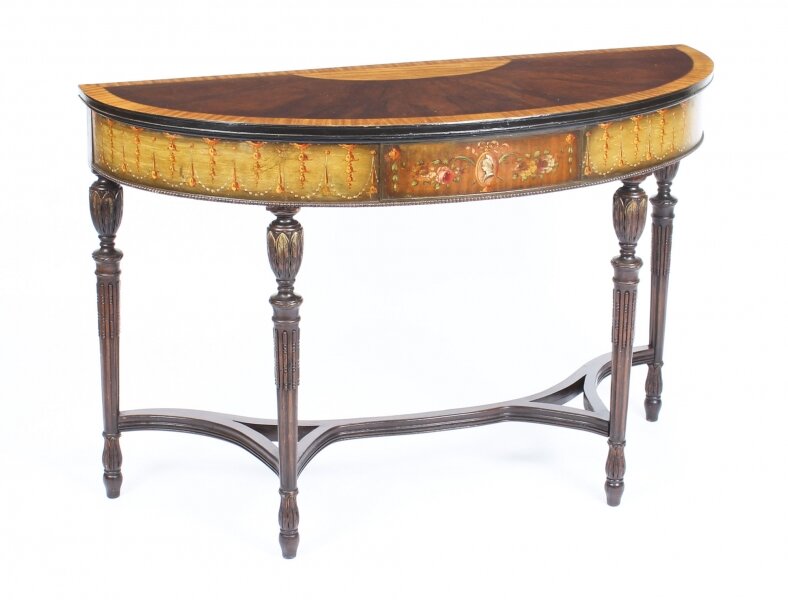 Ref: 09741
Price: £ 0.00
This is a magnificent antique Adam Revival mahogany and satinwood console table, circa 1880 in date. This stunning console...

This is a magnificent antique Adam Revival mahogany and satinwood console table, circa 1880 in date.

This stunning console table is of half-moon shape and features stunning hand-painted decorations of flowers, swags and ribbons, and a Neo-Classical bust to the frieze - all hand-painted in warm and pastel colour schemes, creating a cosy and sophisticated feel.
It is raised on four splendid baluster tapering legs, cojoined by shaped stretchers and terminating in charming turned toupie feet.
The quality and attention to detail throughout are second to none.
Condition:

The Adam style (or Adamesque and "Style of the Brothers Adam") is an 18th-century neoclassical style of interior design and architecture, as practised by three Scottish brothers, of whom Robert Adam (1728–1792) and James Adam (1732–1794) were the most widely known.

The Adam brothers advocated an integrated style for architecture and interiors, with walls, ceilings, fireplaces, furniture, fixtures, fittings and carpets all being designed by the Adams as a single uniform scheme. Commonly and mistakenly known as "Adams Style," the proper term for this style of architecture and furniture is the "Style of the Adam Brothers."

The Adam style found its niche from the late 1760s in upper-class and middle-class residences in 18th-century England, Scotland, Russia (where it was introduced by Scottish architect Charles Cameron), and post-Revolutionary War United States (where it became known as Federal Style and took on a variation of its own). The style was superseded from around 1795 onwards by the Regency Style and the French Empire Style.

Artists such as Angelica Kauffman and Antonio Zucchi were employed to paint classical figurative scenes within cartouches set into the interior walls and ceilings.

The Adam's main rivals were James Wyatt, whose many designs for furniture were less known outside the wide circle of his patrons, because he never published a book of engravings; and Sir William Chambers, who designed fewer furnishings for his interiors, preferring to work with such able cabinet-makers as John Linell, Thomas Linnell, Thomas Chippendale, and Ince and Mayhew. So many able designers were working in this style in London from circa 1770 that the style is currently more usually termed Early Neoclassical.

Robert Adam's design for the Etruscan Dressing Room, Osterley Park, 1773-74; the painted ornaments on the walls and ceilings are the work of Pietro Maria Borgnis, working for Adam.

It was typical of Adam style to combine decorative neo-Gothic details into the classical framework. So-called "Egyptian" and "Etruscan" design motifs were minor features.

The Adam style is identified with: 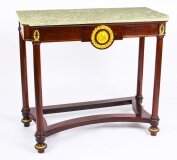 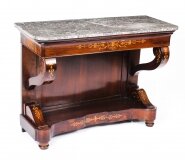