It features a raised mirrored back with an elegant surmounted brass three quarter gallery that is raised on scrolling ormolu supports.

This is over a decorative ormolu mounted frieze above three silk backed and brass lattice work doors  flanked by ormolu mounted Gonçalo Alves columns and standing on a plinth base.

Add a an elegant touch to a special place in your home with this beautiful antique sideboard.

Furniture styles often bear the name of the historical periods in which they occur. For English furniture, this often means naming a style after the king or queen on the throne at the time. With the Regency Period of furniture, the naming convention only partially applies and reveals the complicated political atmosphere of England at the time.


Unlike prior periods, borrowing elements from Roman and Greek furniture, designers of the Regency Period often tried to recreate the actual furniture pieces found in the museums, vaults, and artwork of the time. The introduction of Egyptian artifacts also sparked a desire to bring those elements into the Regency Period style. Thematic motifs of ancient gods, sphinxes, lions, and griffins ornamented many pieces. Additionally, a revival of Eastern influence from China and Japan inspired the use of bamboo, wood carved to resemble bamboo, and lacquered finishes.

While all these cultural and historic influences helped determine the furniture of the Regency Period, the style itself used ornamentation for its elegance, rather than rich carvings and curved lines exhibited in earlier periods of furniture design. The woodworking of the pieces generally exhibited plain lines and surfaces with slender legs and right angles. In many ways, this helped highlight the ornamentation by providing a simplistic background to avoid distraction.

The components of Regency Period furniture include the selection of wood and the use of metals for accents. Mahogany remained the dominant wood for furniture design, while exotic wood like ebony was featured in many high-end pieces. Additionally, veneers of rosewood and zebrawood added visually striking surfaces or features to the clean lines of the style.

The addition of metal accents, however, gave Regency Period furniture its ornate elegance. Furniture makers primarily used brass, while occasionally including bronze or ormolu, an imitation gold. Brass inlays, accents along corners and legs, handles, and hinges, were popular. Of note, brass rosettes or lions' heads to hold rings on cabinet doors and drawers decorated many pieces, while the bases of furniture legs were often animal feet made of brass. Glass insets on cabinet doors would also be covered and protected by brass grills in lattice patterns or scrollwork designs.


Gonçalo Alves is a hardwood (from the Portuguese name, Gonçalo Alves). It is sometimes referred to as tigerwood — a name that underscore the wood’s often dramatic, contrasting color scheme. 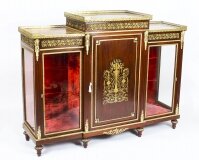 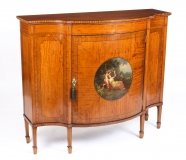