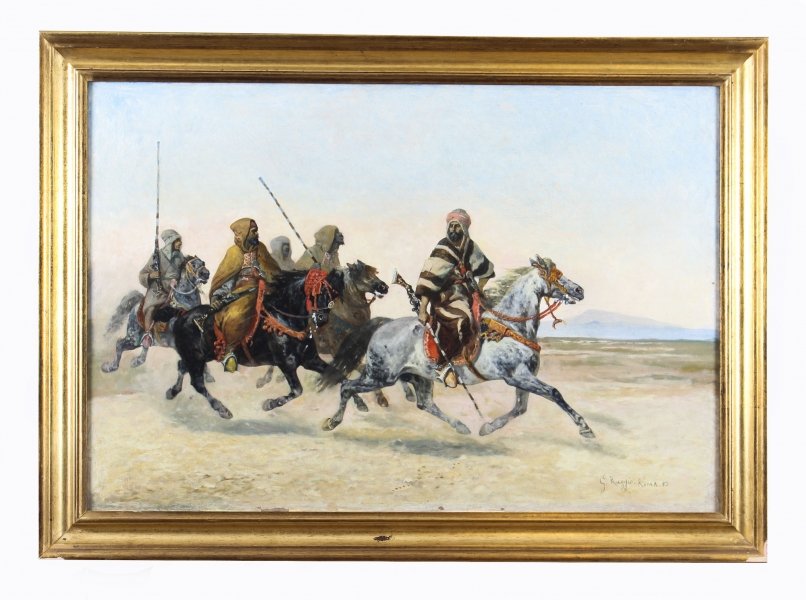 Ref: 09606
Price: £ 0.00
This is a dramatic antique oil on canvas painting of a Bedouin war party by the renowned Italian artist Giuseppe Raggio, signed...

This is a dramatic antique oil on canvas painting of a Bedouin war party by the renowned Italian artist Giuseppe Raggio, signed and dated , Roma 83, for 1883.

Housed in its original giltwood frame.

Add an elegant touch of charm to any room in your home with this lovely painting.

He was born in Chiavari, and while his father wished him to join the merchant marine, by 1845 he had decided to study painting, and participated in his first exhibition in Genoa. He enrolled in the Accademia di Belle Arti of Florence, where he studied under the neoclassical painter Giuseppe Bezzuoli. By 1846, he makes friendships with Giovanni Fattori and painters of the Macchiaioli movement who frequent the Caffè Michelangiolo. In 1848, amid the revolutionary turmoil, Raggio moves to Rome.

In Rome, he meets the painter of agrarian subjects, Nino Costa.  While he continued to paint some religious subjects such as a Holy Family (1854, Genoa) and a Samaritan (1862), Raggio by 1860 changed his subject to that of cattle farming in the Lazio countryside as subjects of his painting. His Bufali (1860) at the Palazzo Pitti in Florence marks this change. In 1865 at Dublin, he exhibited Campagna Romana.

For a 1913 exhibition, the painter and art critic Sartorio spoke of Raggio as a man of simple nature, a believer, who does not know what the world owes to the value of his genius... bypassed and excluded between two generations of painters... (he is an) Artist not to budging an inch from the convictions which he had set himself, and his paintings, from a young age to today, have only one character, a single focus: to tell the story of the humble inhabitants of the Roman Campagna in communion with the herds of sheep and cows. He depicts views of the town devastated by floods and cataclysms, desolate with fever, and in which living descendants of those aborigines, who conserve the seeds of Ancient Rome, and of the right of Catholic morality. The population while poor and stray, maintains the innate goodness, spirituality, generous and fantastic, and fair in his humility, this has pleased the Ligurian painter

In 1915, he was knighted in the Order of the Crown of Italy. Due to his advanced state of poverty, a commission from the Società Economica di Chiavari, composed of Pietro Gaudenzi, Giuseppe Canevelli, and Luigi Brizzolara, approached him to buy some of his works at a reasonable price. He died by October of the next year.


Bedouin
The Bedouin or Bedu are a grouping of nomadic Arab people who have historically inhabited the desert regions in North Africa, the Arabian Peninsula, Iraq and the Levant. The English word bedouin comes from the Arabic badawī, which means "desert dweller", and is traditionally contrasted with ḥāḍir, the term for sedentary people.  Bedouin territory stretches from the vast deserts of North Africa to the rocky sands of the Middle East. They are traditionally divided into tribes, or clans, and share a common culture of herding camels and goats. The vast majority of Bedouin adhere to Islam.

While many Bedouins have abandoned their nomadic and tribal traditions for a modern urban lifestyle, many retain traditional Bedouin culture such as retaining the traditional clan structure, traditional music, poetry, dances and many other cultural practices and concepts.  Urbanised Bedouins often organise cultural festivals, usually held several times a year, in which they gather with other Bedouins to partake in and learn about various Bedouin traditions—from poetry recitation and traditional sword dances to playing traditional instruments and even classes teaching traditional tent knitting. Traditions like camel riding and camping in the deserts are still popular leisure activities for urbanised Bedouins who live within close proximity to deserts or other wilderness areas.

The English word bedouin comes from the Arabic badawī, which means "desert dweller", and is traditionally contrasted with ḥāḍir, the term for sedentary people, also ḥaḍar. The word bādiyah means visible land, in the sense of "plain" or "desert". The term "Bedouin" therefore means "those in bādiyah" or "those in the desert". In English usage, however, the form "Bedouin" is commonly used for the singular term, the plural being "Bedouins", as indicated by the Oxford English Dictionary, second edition.

The term "Bedouin" also uses the same root word as the Arabic noun for "the beginning"."Bedaya." Most Arabs believe the Bedouins to be the predecessors to settled Arabs, including the Nabataeans Arabs of the more westerly Levant region. According to a hadith, Caliph Umar ibn al-Khattab said of the Bedouin, They are the origin of the Arabs and the substance of Islam.
Bedouin traditionally had strong honor codes, and traditional systems of justice dispensation in Bedouin society typically revolved around such codes. The bisha'a, or ordeal by fire, is a well-known Bedouin practice of lie detection. See also: Honor codes of the Bedouin, Bedouin systems of justice. Urbanized Bedouin are less likely to continue such traditions, instead opting for the codes of behavior that govern the wider settled community to which they belong. 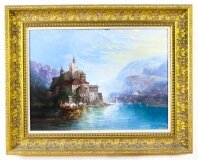