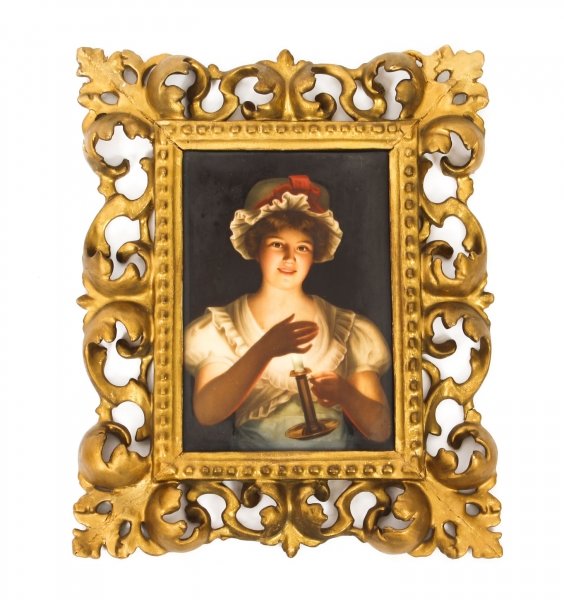 This is a very finely painted Berlin KPM porcelain plaque, circa 1880 in date.

The plaque features a beautiful young lady wearing a white night dress and a green and red cap. She is holding a candle which reflects stunningly in her charming smiling face.

The plaque is painted in great detail to the highest of standards and it is housed in its original pierced foliate Florentine giltwood frame. It bears the impressed marks  'MHR' and '811'.

Add this beautiful image to any wall in your home.


Condition:
The plaque is in excellent condition with no signs of restoration. Please see photos for confirmation.

On 19 September 1763, Frederick II officially became the manufactory's new owner. He purchased the manufactory for the considerable sum of 225,000 thaler and took over the staff of 146 workers. He gave the business its name and allowed it to use the royal sceptre as its symbol. From then on, it was called the Königliche Porzellan-Manufaktur Berlin ("Royal Porcelain Manufactory Berlin") and became a model of how to run a business. There was no child labour, there were regular working hours, above-average incomes, secure pensions, a healthcare fund and assistance for widows and orphans.
In 1784, after a four-year development period, the king's desire for a soft and delicate shade of blue was fulfilled. The colour was known as Bleu mourant ("dying blue"), and it was used to decorate Neuzierat, Frederick's favourite dinner service. The colour was predominant in the king's private chambers at Sanssouci Palace and in the blue chamber of the New Palace in Potsdam, as well as in other castles.
As owner of KPM, the king used the "white gold" as an effective means of diplomacy. Almost all of his diplomatic presents came from the manufactory, and they were to be found at the court of the tsars in Russia and on the tables of European aristocracy.

Under Frederick the Great's successor, his nephew Frederick William II, the manufactory became a technologically leading enterprise. The new king obtained what he needed in the way of porcelain from KPM, but stopped paying cash. The amounts due were deducted from his share of the profits. The manufactory flourished. From 1787 onwards, the average annual net profit came to more than 40,000 thaler.