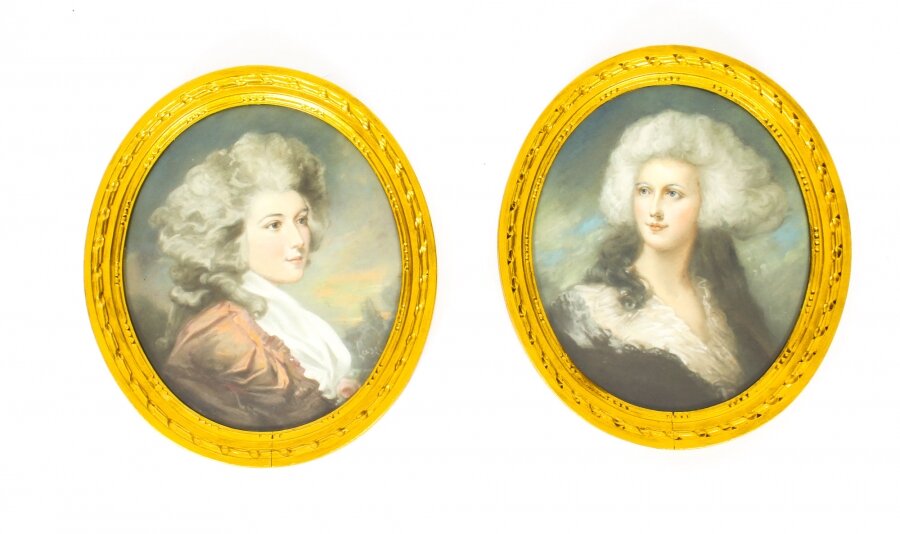 Ref: 09485
Price: £2,200.00
This is a pair of charming oval half-length pastel and gouache portraits of French aristocratic ladies, one bears an...
Question about item
Request a virtual viewing

This is a pair of charming oval half-length pastel and gouache portraits of French aristocratic ladies, one bears an indistinct signature to the bottom right, and they are Circa 1840 in date.

They have bright vibrant colours, are finished in great detail to the highest of standards and are in their original gilt frames each decorated with a carved beaded slip.

In really superb condition the paintings and frames having been beautifully cleaned, please see photos for confirmation.

Pastel Paintings
The true nature and definition of pastel is “to be dry.” It is not a wet medium like most forms of painting. Its dry, stick-like quality allows pastel to have a close association with drawing, which can be used as both a verb and noun. As a verb, it describes the physical act of mark-making to create the appearance of an image, form, or shape. As a noun, it describes the produced image.

Painting, on the other hand, is defined as the application of paint, pigment, or color to a surface. It commonly relies on a brush for application, although other means of application are utilized. Painting can also be used as a verb or noun, signifying the act or end result of the action.

The definitions of drawing and painting have evolved over the years. Most working artists today associate the act of drawing to mark/line making with a dry media like charcoal, pencil, pen and ink, chalk or pastel and the act of painting to shape configurations that consist of value and colour applied wet with paint on a brush. It is easy to see how these two can overlap in definition. An artist can easily use coloured lead pencils to create a piece of artwork that represents a realistic portrayal of shapes, values, and colours and another artist can easily utilize a brush filled with paint to make definite marks and lines. Some have drawn the line, no pun intended, between a pastel drawing and painting by the amount of paper or flat surface allowed to show. If the tone of the paper/surface plays a major visual role in the final appearance of the artwork, it is a drawing. If the paper/surface is completely covered with pastel, it is considered a painting. These differentiations can become even harder to make when pastel is made wet, a process often employed at the beginning stages to set an underpainting or tone to the paper/surface.

So how do you define pastel artwork? Is it drawing or painting? It is a perplexing question. My observation is that if we stick to the dictionary definition, pastel is a drawing medium. It is pigment in a dry stick form. But, when placed in the hands of an artist who applies it with the intent of creating an image that communicates to the observer with the symbolic use of shape, edge, value, and colour, it can be considered a painting medium. While the definition debate will inevitably continue, for most of us it is of little concern. What matters is if the artwork has successfully communicated our intent and we enjoy the medium. As an artist friend once said, “I let others label what my artwork is, as long as they see it as beautiful”.