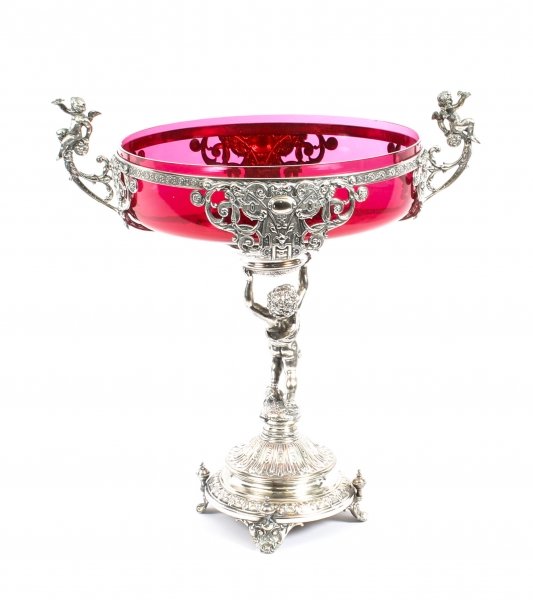 This is a magnificent German WMF Art Nouveau silver plated and cranberry glass centrepiece, circa 1890 in date.

This stunning centrepiece features two beautiful silver plated winged cherubs - one on each side of the large round cranberry glass bowl.


The bowl also has two graceful silver plated plaques, each one being finely chased with classical Art Noveau foliage decoration and a vacant oval cartouche against a textured background.

The central pedestal features a very finely chased silver plated cherub with his hands holding the bowl and posing with one foot on a finely chased snail.

The centrepiece stands on an elegant domed stepped round base which is finely chased with foliage decoration and is raised on four exquisite foliate feet.

The piece is fully hallmarked WMF on each foot.

This is truly a special item that can be used and admired at the centre of a dining table.  The quality and craftsmanship here are undeniable.

In 1853, Daniel Straub, a miller from Geislingen, joined forces with the Schweizer Brothers to form the "Metallwarenfabrik Straub & Schweizer" in Geislingen.

This was the second company to be founded by Straub - previously in 1850, from the nucleus of a small repair workshop, which he had set up to work on the construction of Geislingen's famous railway incline, he had founded Maschinenfabrik Geislingen. This company was involved mainly in manufacturing mill turbines and traded throughout Europe.

1880 saw the merger between Straub & Sohn and "Ritter & Co.", Esslingen, to form a public limited company under the name of Wurttembergische Metallwarenfabrik. At the time of the merger, Ritter & Co.'s Esslingen factory was already using the electroplating method of silver plating and had the more modern production facilities at its disposal. Straub's company, on the other hand, was the more profitable of the two.

1892 saw the development of a special technique for silver plating cutlery, whereby the silver is distributed in a way that, at the points of the cutlery most exposed to wear and tear, the coating is twice as thick as elsewhere. This process was patented and is still in use today. Known nowadays as 'Perfect Hard Silver plating' the technique remains exclusive to WMF.

Under Carl Hugele the company gained international standing. At the turn of the century the factory in Geislingen employed 3,000 workers. By 1910, this number had already grown to 4,000, making WMF the largest company in Wurttemberg at this time. Sales catalogues were printed in twelve languages. Subsidiary companies in London, Warsaw and Vienna opened up export markets.

Under the direction of Albert Mayer the WMF studio was influenced by the art nouveau style. The product range was modernized and considerably extended. In 1905 WMF acquired a majority holding of the Cologne company Orivit AG, which manufactured products from "Orivit", a tin alloy.

As of 1925, products created by the Contemporary Decorative Products Department (NKA) made their debut on the market. This department was set up under the direction of Hugo Debach in order to establish the name of WMF amongst consumers interested in art and design. This department was responsible for producing the special "Ikora" finish, which has earned an important place in the annals of art history. The "Ikora" brand name referred to a specific method of treating the surface of the metal, by which layers of coating were applied in a partly chemical and partly heat induced process. A host of newly developed hand-finishing techniques enhanced the possibilities for adding decorative flourishes to the products. Despite being mass produced, every item looked as if it had been individually crafted.

At the end of the war the company had lost its foreign assets, associated factories and retail outlets. The years following 1945 saw the start of a concerted effort to reconstruct in terms of personnel, organizational structures and technology in the remaining factory sites. The network of retail shops was rebuilt. Very soon, subsidiaries sprang up in the USA, Holland, Canada, Switzerland, Austria and Italy.

By 1950, WMF staff numbers had again swelled to 3,000. Silverplated tableware and cutlery accounted for two thirds of WMF's turnover, with shops specialising in clocks and watches, gold and silverware representing the company's main customers. A shift in emphasis occurred at the end of the 1950s and was marked by an increase in the importance of Cromargan cutlery and hollowware. This period saw the creation of classic products, such as designed by Wilhelm Wagenfeld, which still feature in or have been reintroduced into the WMF collection. It also saw an increase in the volume of trade in household and kitchenware items between WMF and specialist retail shops. A number of stemware collections completed the WMF catalogue, followed by the development of an extensive range of products for the hotel and catering industry.

By 1960, the Geislingen factory alone employed around 5,800 workers. A shortage of space and manpower at this site led to the setting up of additional branch factories, like the factory in Hayingen and Riedlingen.
Cranberry glass or 'Gold Ruby' glass is a red glass made by adding gold salts or colloidal gold to molten glass.


The origins of cranberry glass making are unknown, but many historians believe a form of this glass was first made in the late Roman Empire. This is evidenced by the British Museum's collection Lycurgus Cup, a 4th-century Roma glass cage cup made of a dichroic glass, which shows a different colour depending on whether light is passing through it or reflecting from it; red (gold salts) when lit from behind and green (silver salts) when lit from in front.

The craft was then lost and rediscovered in the 17th century Bohemian period by either Johann Kunckel in Potsdam or by the Florentine glassmaker Antonio Neri in Italy. Neither of them knew the mechanism which yielded the colour, however. Chemist and winner of the 1925 Nobel Prize in Chemistry Richard Adolf Zsigmondy was able to understand and explain that small colloids of gold were responsible for the red colour.

The most famous period of cranberry glass production was in 19th century Britain during the Victorian Era.

Legend holds that cranberry glass was first discovered when a noble tossed a gold coin into a mixture of molten glass. This legend is almost certainly not true, as the gold must be dissolved in acqua regia before being added to the molten glass.

Cranberry glass creations were most popular as a table display, often holding candy or flowers. 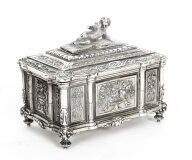