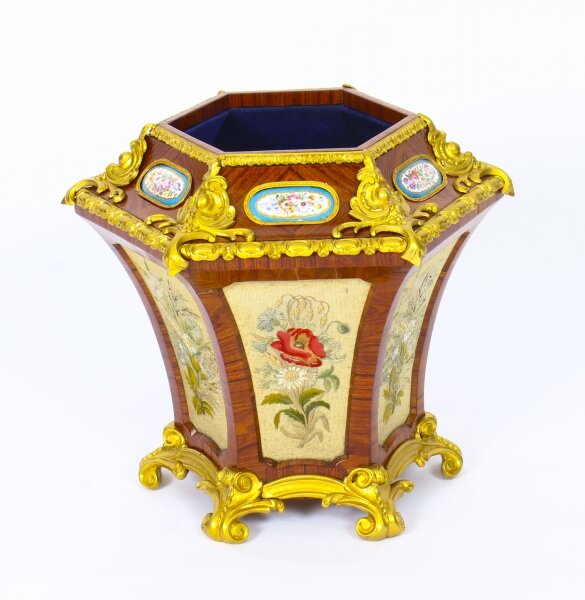 This is a magnificent and exceptionally rare antique French ormolu mounted burr walnut and kingwood jardiniere, also ideal for use as a luxurious waste paper basket, circa 1840 in date.

The jardiniere is of hexagonal shape with inward curving sides, is exquisitely decorated with rich gilded ormolu mounts and stands on six elegant scrolling ormolu legs.

The top shoulders of the jardiniere have six oval hand painted Sevres porcelain plaques which depict a variety of flowers and leaves - including pink roses, violettes and daisies.

Each side of the hexagonal body has a superb petit point needlework panel depicting flowers and leaves. The craftmanship of such needlework is extremely finely detailed and even the nuances of the foliage show in all their glory.

Not only is this delightful piece of exeptional quality and rare beauty but its provenance makes it also a unique piece. In fact, it belonged to the Grand Duchess Olga Nikolaevna of Russia (1822-1892), later Queen Olga of Wurttemberg, who received it as a gift from her father Tsar Nicolas I (1796-1855) on occasion of her marriage to Crown Prince Karl Friedrich Alexander of Wurttemberg (1823-1891) in 1846.
Provenance:

In excellent condition having been beautifully cleaned polished and the interior relined in our workshops, please see photos for confirmation.

Ormolu - (from French 'or moulu', signifying ground or pounded gold) is an 18th-century English term for applying finely ground, high-carat gold in a mercury amalgam to an object of bronze. The mercury is driven off in a kiln leaving behind a gold-coloured veneer known as 'gilt bronze'. 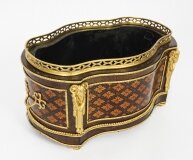 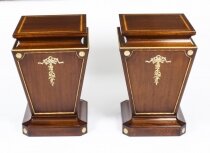