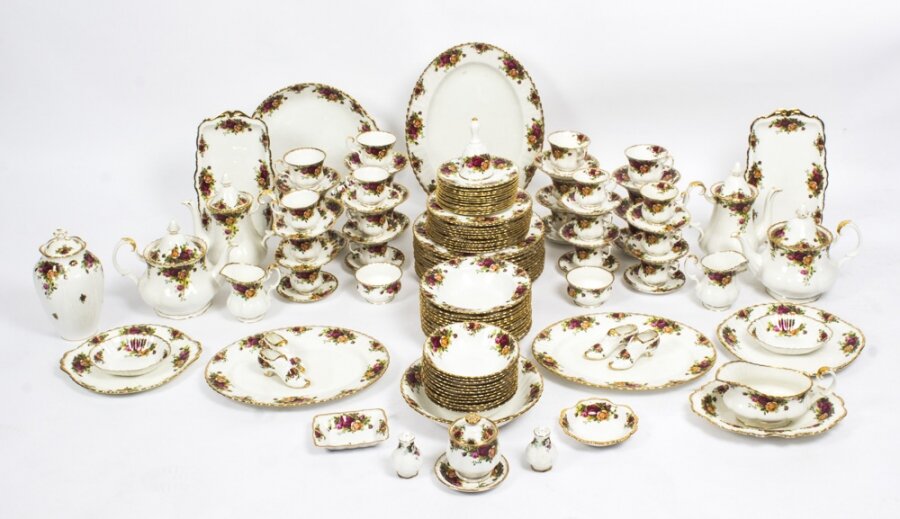 This is a wonderful vintage 150 piece tea, coffee and dinner service by Royal Albert China, the design is called Old Country Roses, Circa 1960 in date.

It is beautifully made of fine bone china porcelain with hand enamelled floral decoration.

It is offered in truly excellent condition and appears to have rarely if ever been used.

Old Country Roses was designed by Harold Holdcroft and introduced in 1962. Its flamboyant design was inspired by the riot of colour and assortment of flowers in a typical English cottage garden, and especially by fragrant roses in full bloom. Harold used both rich and soft colours combining lush deep red roses with warmth from a peach tea rose and delicacy from the blush pink, and accentuated the composition with rich green foliage.

Brilliant gold stippling and 22-carat gilded rims complete the design creating one of the most exuberant expressions of Royal Albert's acclaimed century-long, floral tradition. Overwhelmingly popular throughout the world, Old Country Roses is regarded as the epitome of fine English teaware.

Thomas Clarke Wild joined his father, Thomas Wild, in the purchase of the Albert Works, Longton in 1895, and the partnership manufactured bone china teaware as Thomas C. Wild & Co. Wild became sole proprietor on the death of his father in 1898 and from 1905 to 1917 the business traded simply as ‘Thomas C. Wild’. The St Mary’s Works, Longton, was purchased from Bernard Moore in 1905 and used initially for decoration of the products manufactured at the nearby Albert Works. As Wild’s business prospered he acquired other factories and pottery businesses, the Park Place Works was acquired in about 1910, followed by the Royal Albert China Works in 1917, the Shore & Coggins Ltd business (and Edensor Works) in 1918 and that of William Lowe in 1919. By the early 1920s Wild owned or had controlling interests in about 15 North Staffordshire potteries.

Thomas Wild's sons Thomas E. Wild and Frederick C. Wild joined the business in the early years of the 20thcentury and were admitted into partnership with their father in 1917, the business then trading as Thomas C. Wild & Sons. Wild retired from active management in 1932 and the business was incorporated as Thomas C. Wild & Sons Ltd with Thomas and Frederick Wild as the permanent directors. In the course of the 1930s the sons rationalised the business closing or selling off some of their father’s many acquisitions and, beginning in 1937, undertaking the modernisation and expansion of the St. Mary’s Works.

As a major exporter, the business remained in production during the Second World War and in 1946 the decision was made to again expand the St Mary’s Works. To fund the expansion the company was one of the first UK pottery businesses to list on the London Stock Exchange. The share issue, on 8th July 1947, closed five times oversubscribed only five minutes after opening. Control of the business, and its three remaining subsidiaries Roslyn China Ltd, Chapmans (Longton) Ltd, and Shore & Coggins Ltd, remained, however, firmly in the hands of the Wild brothers and their sons. The company acquired Paragon China Ltd in 1960 greatly expanding its manufacturing base.

Only four years later, in 1964, the Pearson Group through its subsidiary Lawleys Ltd made a cash and share offer for the whole share capital of T. C. Wild & Sons Ltd and the Wild family members accepted the offer. The new acquisition was merged by Pearson’s into their Lawley Group to form a new company Allied English Potteries Ltd although Wild and the other member companies continued to trade under their own, well-known, names. Thomas E. Wild was appointed as life president of Thomas C. Wild & Sons Ltd and sons Kenneth and Peter Wild joined the Board of the newly formed Allied English Potteries Ltd. The Wild businesses initially operated independently within Allied English Potteries, but in 1966 AEP closed the Shore & Coggins Ltd business, leading to the resignation of Peter Wild—ironically the closure was to free the Edensor Works to allow increased production of the Wilds’ own iconic Royal Albert china. In 1969 Kenneth Wild, managing director of T. C. Wild & Sons Ltd, and David Wild, managing director of Paragon China Ltd, (also an AEP Board member) resigned from their positions severing the last family links to the company founded by their grandfather.

In 1970, Allied English Potteries Ltd renamed its Thomas C. Wild & Sons Ltd subsidiary as Royal Albert Ltd. Two years later, in 1972, the various Allied English Potteries Ltd companies were subsumed into Royal Doulton following Doulton’s acquisition by the Pearson Group. Royal Albert Ltd continued to operate as a unit of Royal Doulton at the St Mary's Works until the historic works were closed in 1998 with the loss of many hundreds of jobs. Manufacture of ‘Royal Albert’ ware was transferred to other Doulton factories and to Doulton’s manufacturing plant in Indonesia, and from December 2002 UK production of ‘Royal Albert' ceased. The historic St Mary’s Works was eventually purchased by a private owner with the intention of converting the building into a small pottery manufacturing site and visitor centre.

Between 1972 and 2002, as a Royal Doulton company, Royal Albert Ltd continued to manufacture the traditional fine bone china tableware and teawares made by its famous predecessor. Harold Holdcroft's Old Country Roses, introduced in 1962, remain as the flagship of the Royal Albert brand and continues in production as one of the world's most popular and well known china patterns. Designer Peter Roberts succeeded Holdcroft in 1972 and floral patterns continued to dominate the Royal Albert offering. In addition to teaware, the Royal Albert name has been used on fine dinnerware, giftware and commemoratives, especially those with a Royal connection.

In 2005 Wedgwood completed its takeover of Royal Doulton acquiring the ‘Royal Albert’ brand. Wedgwood itself was placed in receivership in 2008, however ‘Royal Albert’ is still a core brand of its current owner WWRD Holding Ltd.

Thomas C. Wild & Sons Ltd was primarily a manufacturer of good quality, bone china teaware. Wild built his early success on 'Derby' patterns, emulating the popular Crown Derby wares in a good quality but cheaper china. The pattern ‘Heirloom’ was typical and, in various forms, was produced by the company into the 1960s. Harold Holdcroft was appointed art director in 1934 and under his direction the company produced some notable art deco tea ware shapes and decorations. Holdcroft’s most famous pattern 'Old Country Roses' was released in 1962. It was based on an earlier (1921) Wild pattern 'Kings Ransom' and is still in production, with innumerable variants, today.

Between 1972 and 2002, as a Royal Doulton company, Royal Albert Ltd continued to manufacture the traditional fine bone china tableware and teawares made by its famous predecessor. Harold Holdcroft's Old Country Roses, introduced in 1962, remained as the flagship of the Royal Albert brand and continues in production as one of the world's most popular and well known china patterns. Designer Peter Roberts succeeded Holdcroft in 1972 and floral patterns continued to dominate the Royal Albert offering. In addition to teaware, the Royal Albert name has been used on fine dinnerware, giftware and commemoratives, especially those with a Royal connection.

Royal Albert Ltd marks include a multicolour floral spray, the pattern name and the company name. 'Royal Albert' was registered as a trade name in 1993 and in 2005 it became a Waterford-Wedgwood fine china brand. 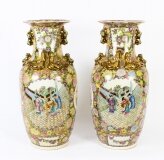 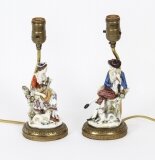