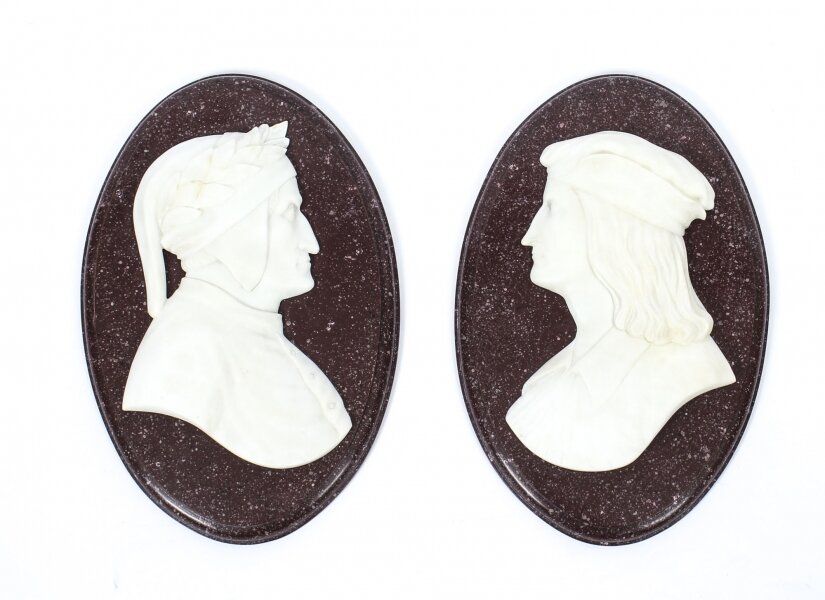 Ref: 09229
Price: £1,750.00
This beautiful pair of Italian white Carrara marble profile busts of Virgil and Dante date from the mid 19th Century.   The...
Question about item
Request a virtual viewing

This beautiful pair of Italian white Carrara marble profile busts of Virgil and Dante date from the mid 19th Century.

The sensitively carved pair of plaques depict the profile of the classical writers Virgil and Dante and are superbly mounted on oval faux Porphyry plaques.

The attention to detail throughout this pair is second to none.

More
Dante (1265 - 1321)
Poet, writer, political thinker. Dante was a Medieval Italian poet and philosopher whose poetic trilogy, The Divine Comedy, made an indelible impression on both literature and theology.

Dante was an Italian poet and moral philosopher best known for the epic poem The Divine Comedy, which comprises sections representing the three tiers of the Christian afterlife: purgatory, heaven, and hell. This poem, a great work of medieval literature and considered the greatest work of literature composed in Italian, is a philosophical Christian vision of mankind’s eternal fate. Dante is seen as the father of modern Italian, and his works have flourished since before his 1321 death.

Dante Alighieri was born in 1265 to a family with a history of involvement in the complex Florentine political scene, and this setting would become a feature in his Inferno years later. Dante’s mother died only a few years after his birth, and when Dante was around 12 years old, it was arranged that he would marry Gemma Donati, the daughter of a family friend. Around 1285, the pair married, but Dante was in love with another woman—Beatrice Portinari, who would be a huge influence on Dante and whose character would form the backbone of Dante’s Divine Comedy.

Virgil (70 B.C-19 B.C), regarded as the greatest Roman poet, known for his epic, the Aeneid (written about 29 B.C.E), which had taken its literary model from Homer's epic poems Iliad and Odyssey.

Virgil was born on October 15, 70 B.C.E., in a small village near Mantua in Northern Italy. Publius Vergilius Maro, or Virgil has influenced Western literature for two millennia, but little is known about the man himself. His father was a prosperous landowner, described variously as a "potter" and a "courier", who could afford thorough education for the future poet. Virgil attended school at Cremona and Milan, and then went to Rome, where he studied mathematics, medicine and rhetoric, and completed his studies in Naples. He entered literary circles as an "Alexandrian," the name given to a group of poets who sought inspiration in the sophisticated work of third-century Greek poets also known as Alexandrians.


PORPHYRY
Imperial Porphyry is an extremely rare and historically important stone. By Imperial decree, it was solely for the use of the Roman emperors and the Imperial family. It comes from a single mountain in Egypt: Mons Porphyrites at Djebel Dukhan, high up in the mountains of the Eastern Desert. the sixth-century writer Paulus Silentiarius describes its use in Constantinople within Hagia Sophia, as ‘Porphyry is powdered with stars.