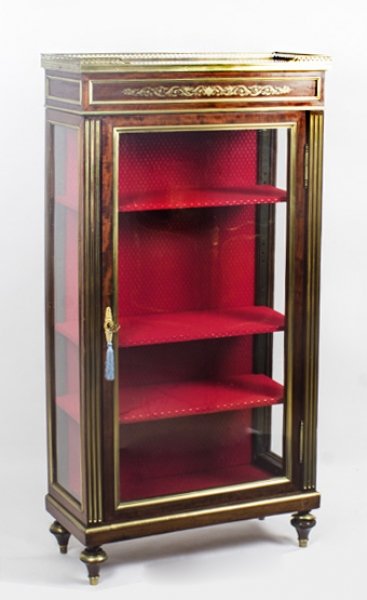 The top is inset with a deeply veined rouge marble and features a pierced brass three-quarter galleried top. The frieze is beautifully decorated with an inlaid brass cartouche with foliate and floral ornamentation. A pair of brass inset fluted columns frame the glazed door and the interior has three shelves and is lined with a beautiful red fabric. It is raised on elegant toupie feet and is complete with the orginal working lock and key.

Add a touch of unparalleled style to your home. It is perfect for displaying your collection of silver or porcelain.

The Classical Ideal
The second half of the eighteenth century in Europe saw the increasing influence of classical antiquity on artistic style and the development of taste. The achievements of the Renaissance from the period of Raphael (1483–1520) to that of Nicolas Poussin (1594–1665) and Claude Lorrain (1604–1682) served as a conduit for a renewed interest in harmony, simplicity, and proportion, an interest that gained momentum as the new science of archaeology brought forth spectacular remnants of a buried world of great beauty. Giovanni Paolo Panini’s Ancient Rome (1757; 52.63.1) is representative of the movement, a tour-de-force painting encompassing many of the monuments in and around Rome, including the Pantheon, the Colosseum, Trajan’s Column, the Medici Vase, the Farnese Hercules, and the Laocoön. In the midst of a grand gallery, students copy the great works of antiquity. The Neoclassical style arose from such first-hand observation and reproduction of antique works and came to dominate European architecture, painting, sculpture, and decorative arts.
It was not until the eighteenth century that a concerted effort to systematically retrieve the glories of lost civilizations began. Illustrations of freshly discovered archaeological ruins in Athens, Naples (Herculaneum and Pompeii), Paestum, Palmyra (Syria), Baalbek (Lebanon), and the Dalmatian coast were disseminated throughout Europe in treatises with detailed descriptions, picturesque landscape views, reproductions of frescoes, and measured drawings of temples, theaters, mausoleums, and sculptures. Reports of extensive travel expeditions such as those by Robert Wood, John Bouverie, Giovanni Battista Borra, and James Dawkins, with their Ruins of Palmyra (1753) and The Ruins of Balbec (1757), James “Athenian” Stuart and Nicholas Revett’s Antiquities of Athens (1762), and Robert Adam’s Ruins of the Palace of the Emperor Diocletian at Spalatro in Dalmatia (1764) broadened the public’s historical perspective and stimulated a passion for all things savoring of the ancient past.