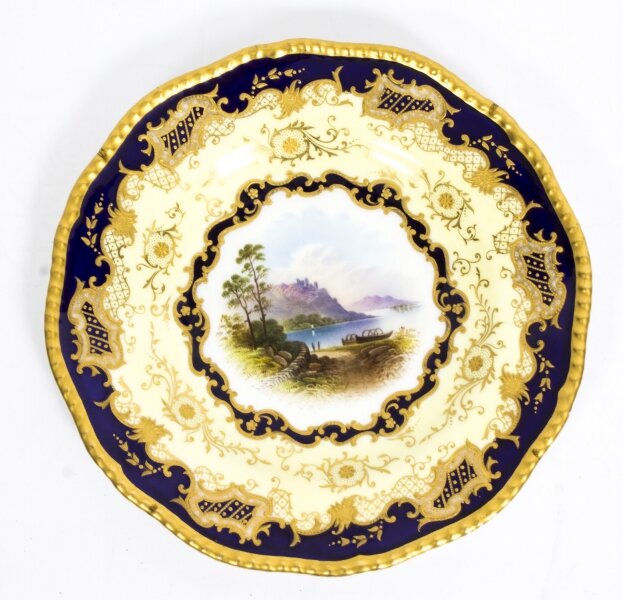 The central hand painted scene of Lake Menteith is set within a yellow and cobalt blue border heightened with raised gilt and with a striking gilt gadrooned rim and raised gilded decoration.

It has printed and painted marks to the base.

There is no mistaking the quality and unique design of this plate which is sure to be a treasured addition to your home.

Condition:
In excellent condition, with no chips, cracks or repairs, please see photos for confirmation.

Coalport,
Colebrook Dale, Shropshire: established in 1795 by John Rose, who had been an apprentice at Caughley until 1785, when he started a small pottery at Jackfield on his own account. In 1795 he moved to Coalport and built premises on the canal bank opposite Caughley, which he acquired in 1799, and absorbed in 1814.

By 1798 Rose was making bone china and until the late 1820s was largely engaged in supplying this in the white to London and provincial dealers end enamellers, althogh much decorated ware was sold.

After the death of John Rose in 1841 he was succeeded by his nephew William F. Rose and William Pugh , the latter becoming sole proprietor in 1862. Now housed at Stoke-on-Trent, the factory is still in productio