Ref: 07662c
Price: £165.00
A thoroughly delightful vintage crystal cut glass and engraved decanter with stopper dating from the second half of the...
Question about item
Request a virtual viewing

A thoroughly delightful vintage crystal cut glass and engraved decanter with stopper dating from the second half of the  20th Century.

Made by Royal Brierley in the 1980s and is in their Honeysuckle pattern.

Joseph Silver leased the Moor Lane Glasshouse at Brierley Hill. His daughters married William Stevens and Samuel Cox-Williams, who took control of the business in 1847. The company became subsequently known as the Stevens and Williams Glassworks.

Many of the creations became quality museum pieces. The trading name Stevens and Williams was used until the 1930s when the company became Royal Brierley Crystal to signify its royal warrant of appointment as glassmakers. The first royal warrant was awarded by King George V and the most recent by Charles, Prince of Wales.

The company is now owned by Dartington Crystal Ltd. 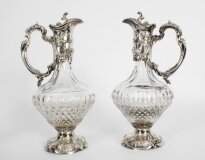 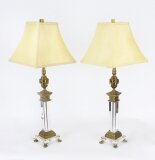