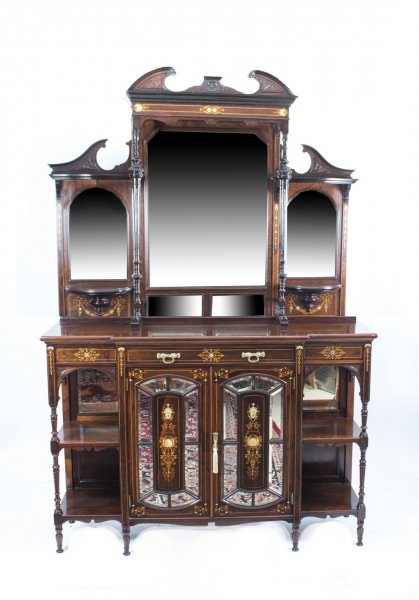 Ref: 07200
Price: £ 0.00
This is a stunning antique English Edwardian inlaid rosewood breakfront side cabinet with mirrored back and door panels,...

This is a stunning antique English Edwardian inlaid rosewood breakfront side cabinet with mirrored back and door panels, raised on slender turned supports, circa 1890 in date.

This cabinet is of the very highest quality, with exquisite hand cut inlaid marquetry inlay in satinwood, bone and mother of pearl.

The base has a central drawer above a pair of astragal glazed doors with a smaller niche on either side.  These decorative niches would be ideal to display your favourite ornaments.

The beautiful and decorative triple mirrored back has  shelves to display your ornaments  and is smothered in fabulous marquetry decoration.

It has its original brass handles and is complete with working locks and keys.

Add a touch of unparalleled style to your home.

is decorative artistry where pieces of material (such as wood, mother of pearl, pewter, brass silver or shell) of different colours are inserted into surface wood veneer to form intricate patterns such as scrolls or flowers.