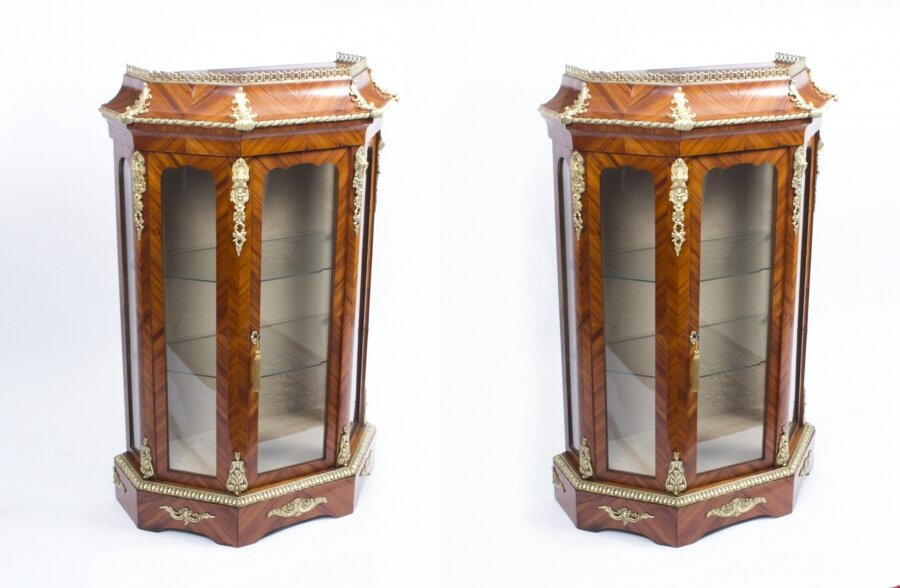 Ref: 07180
Price: £3,850.00
This is a superb antique pair of English Victorian tulipwood  and ormolu mounted vitrines, circa 1870 in date. Adding to...
Question about item
Request a virtual viewing

This is a superb antique pair of English Victorian tulipwood  and ormolu mounted vitrines, circa 1870 in date.

Adding to their truly unique character they are  decorated with exquisite gilded ormolu mounts and further embellished by the brass galleries around the tops.

The interiors have been beautifully lined in grey velvet and each has two glass shelves,  so they are ready to display your collectables.

One cannot overstate the truly unique opportunity to own such a delightful pair of cabinets.

With the original working locks and keys.
Condition:

Brazilian tulipwood is a different species. A classic high-quality wood, it is very dense with a lovely figure. It is used for inlays in furniture and for small turned items. Available only in small sizes, it is rarely used in the solid for luxury furniture. Like other woods with a pronounced figure it is rather strongly subject to fashion.