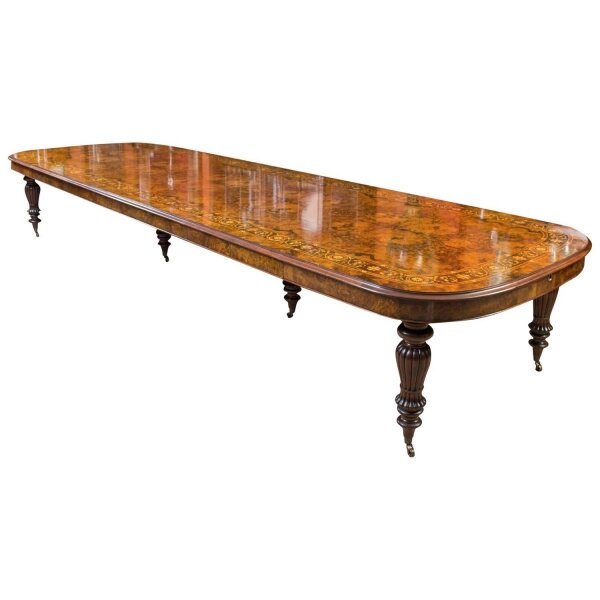 This large dining table is a wonderful piece of luxury furniture which would equally as well be at home as a conference table or bespoke piece for a commercial venue such as a hotel or restaurant.

Burr walnut has been used by fine furniture craftsmen for centuries due to its beautifully-shaped grain. This particular large dining table also incorporates exquisite inlaid marquetry decoration featuring flowers, urns, vases and ribbons. Made from wood veneers of various colours, we have French polished this large dining table by hand to show off the glorious wood grains to best effect.

This lovely large dining table has six legs to ensure it is fully stable and each leg terminates with a brass cap castor.

This large dining table is newly made and is therefore in pristine condition.

The Making of this Marquetry Masterpiece

We have made a video above to show you how this spectacular large dining table was made. Please take a few moments to watch it.

In our Italian workshop we are very lucky to have third-generation master craftspeople where this lovely large dining table was handcrafted to a bespoke design. As you can see from the photos and video it has been made with the greatest attention to detail, right down to individually hand colouring each small piece of marquetry veneer.

Burr walnut is a wonderfully figured wood, particularly when the wood it cut and polished from the area of the tree where the trunk connects with the roots. True burr walnut comes from a tree where a rare growth of hundreds of tiny branches has started. Burr walnut is highly prized by fine furniture makers because of the highly decorative nature of the wood figure which adds elegance and style to their pieces. This is the reason we have decided to use burr walnut veneers for our bespoke large dining tables.

Marquetry is the technique of creating designs and patterns by inlaying different materials into a piece of stone or wood. It was developed in the early 16th century in Florence, where stone masons inlaid different types of marble, precious stones and jaspars to create intricate patterns in their stonework, particularly in churches. A similar expertise arose in Flanders for wood marquetry, and this region produced master craftsmen in the art.

The seventeenth century saw the rise of the craft in France, when the era of conspicuous consumption of the French monarchy gave marquetry a boost as highly ornate designs created extremely luxurious looking furniture which was also prized for the skill needed to produce it. Louis XIV commissioned a large amount of marquetry furniture and fittings for his royal palaces and residences and the French aristocracy followed suit.

Early marquetry masters included the Flemish craftsman Pierre Golle. He and his son-in-law, Andre-Charles Boulle founded a dynasty of cabinet makers in Paris who became famous for their marquetry using brass and pewter in intricate foliage designs. They were also suppliers to the royal household and helped to popularise the art.

Marquetry continues to flourish today and uses modern techniques and designs. However, we consider ourselves very lucky to have third generation skilled marquetry craftsmen and women in our Italian workshop capable of producing marquetry that matches any of that produced in bygone eras. This enables us to create this exquisite marquetry large dining table for you.

Joseph Fitter became the pioneer developer of the screw mechanism that enables a table winding mechanism to work having bought the patent and business from Samuel Hawkins in 1864. Fitter adapted the screw expander for tables and also used it for such things as piano stools.

French polish is made from alcohol and shellac, but it is more of a process than just the application of a type of polish. French polishing requires a lot of repetitive work of buffing and polishing that results in a very high gloss on the wood surface. It also is probably the best way to bring out the fine detail of wood figuring and as such has been used for luxury furniture items since the 18th century when it became prominent.

Surfaces that are French polished are soft and can stain easily, but can be more easily repaired than varnished or lacquer surfaces as patch fixes can be blended easily into the surrounding finish. 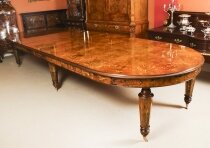 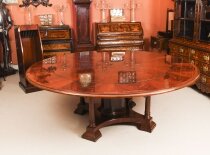