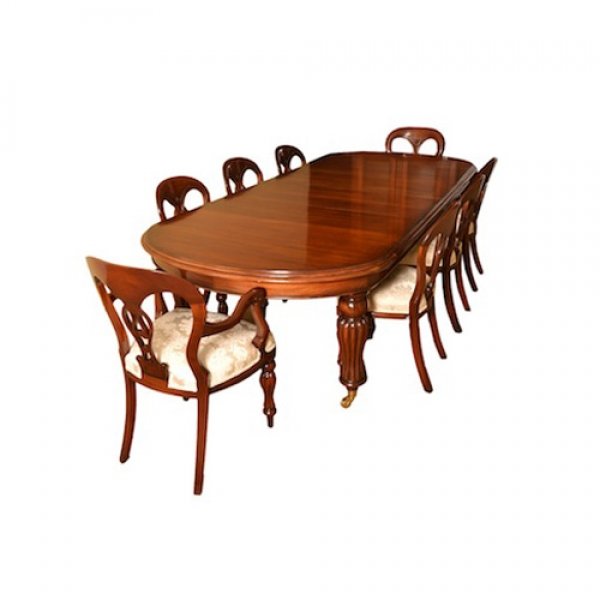 Ref: 05990a
Price: £ 0.00
This is a rare opportunity to own this marvelous Victorian style dining set. The set was made of solid mahogany for the...

This is a rare opportunity to own this marvelous Victorian style dining set. The set was made of solid mahogany for the renowned retailer Maple & Co. It is in superb condition as it was only used a few times per year for special occasions.

The set comprises the following:

* A solid mahogany dining table with winding mechanism and two leaves that can be added or removed as required to suit the occasion.

* A set of eight hand carved solid mahogany fiddle back dining chairs comprising six chairs and two armchairs. The chairs are very comfortable and have been reupholstered  in cream damask making them look very luxurious.

Purchased from a beautiful house in Hampstead Garden Suburb, London, they had purchased it at great expense from Maple & Co., Tottenham Court Road, London, in the late 1990's.

Enhance your dining experience with this lovely suite.


Mahogany is probably one of the largest ‘families’ of hardwood, having many different varieties within its own species.

Winding Mechanism for extending tables
A man by the name of Samuel Hawkins applied for a patent on a screw expander on June 6th, 1861. Presumably, Mr. Hawkins either died or retired because his business was taken over by a young machinist named Joseph Fitter  in 1864.
Joseph Fitter operated a machinist shop where he produced winding mechanisms for extending tables as well as screw expanders for piano stools and other applications at 210 Cheapside, Birmingham England by the name of Britannia Works. 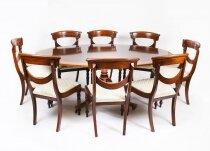