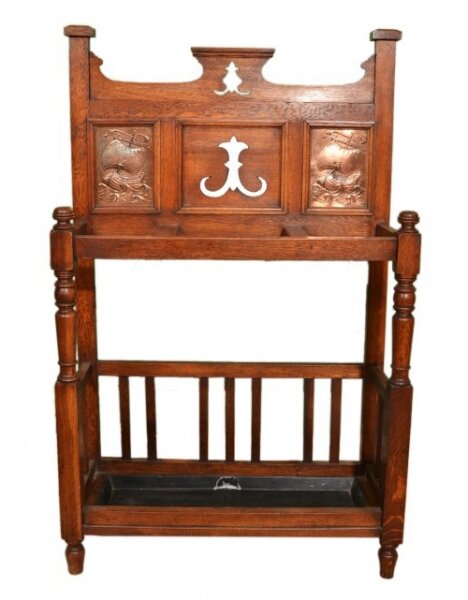 This is an antique Arts and Crafts oak umbrella stand, circa 1890 in date.

It is a three division umbrella stand with shaped and pierced back and inset copper Nef panels.

In medieval France the word nef was applied to various types of boat-shaped containers, including the most magnificent objects intended for the dining tables and buffets of the rich.  In this case the copper panels have been embossed with pictures of sailing ships.

The three division base has turned uprights and slatted back and sides and the original drip trays are in the base.

It is a stylish yet very practical item which would look lovely in any hall.

More
Oak is a tree or shrub in the genus Quercus - Latin "oak tree" having approximately 600 extant species. Oak wood has a density of about 0.75 g/cm3, great strength and hardness, and is very resistant to insect and fungal attack because of its high tannin content. It also has very appealing grain markings, particularly when quartersawn. Oak wood is very durable, easy to maintain and resistant to wear and tear which is why it can be easily handed to the next generations if taken well care of.

Oak wood virtually lasts forever and you can still admire oak furniture in museums and palaces even if it was made many centuries ago. Oak has been prized since the Middle Ages for use in interior panelling of prestigious buildings such as the debating chamber of the House of Commons in London and in the construction of fine furniture.

The Arts and Crafts movement was an international design movement that flourished between 1860 and 1910, especially in the second half of that period, continuing its influence until the 1930s. It was led by the artist and writer William Morris (1834–1896) during the 1860s, and was inspired by the writings of John Ruskin(1819–1900) and Augustus Pugin (1812–1852), although the term "Arts and Crafts" was not coined until 1887, when it was first used by T. J. Cobden-Sanderson at a preliminary meeting of the Arts and Crafts Exhibition Society. The movement developed first and most fully in the British Isles, but spread across the British Empire and to the rest of Europe and

It was largely a reaction against the perceived impoverished state of the decorative arts at the time and the conditions in which they were produced. It stood for traditional craftsmanship using simple forms and often applied medieval, romantic or folk styles of decoration. It advocated economic and social reform and has been said to be essentially anti-industrial.

Arts and Crafts objects were simple in form, without superfluous or excessive decoration, and how they were constructed was often still visible. They tended to emphasize the qualities of the materials used ("truth to material"). They often had patterns inspired by British flora and fauna and used the vernacular, or domestic, traditions of the British countryside. Several designer-makers established workshops in rural areas and revived old techniques. The Arts and Crafts style was partly a reaction against the style of many of the items shown in the Great Exhibition of 1851, which were ornate, artificial and ignored the qualities of the materials used.