Ref: 04067a
Price: £1,800.00
This is a beautiful pair of open bookcases in the Sheraton style, with adjustable shelves.   They made from flame mahogany...
Question about item
Request a virtual viewing

This is a beautiful pair of open bookcases in the Sheraton style, with adjustable shelves.

They made from flame mahogany and have beautiful inlaid decoration with crossbanding, and each has five adjustable shelves.

Cuban Mahogany was so sought after, that by the late 1850′s, this particular variety became all but extinct 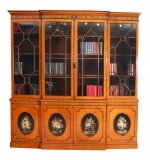