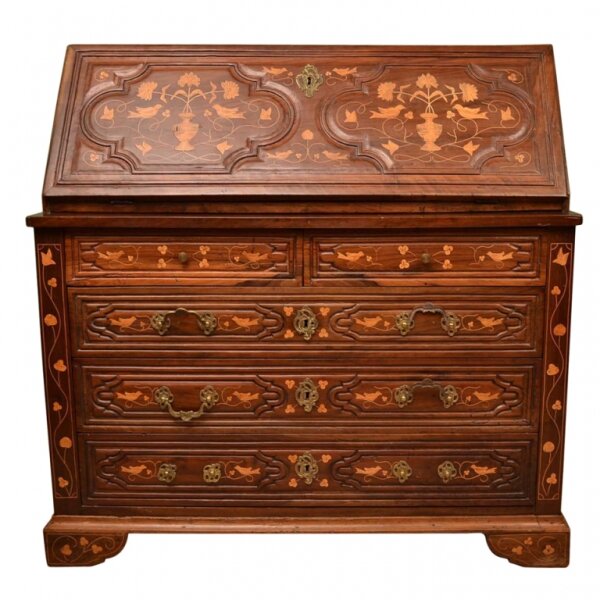 Ref: 03768
Price: £6,750.00
This is an exquisite antique Spanish bureau, circa 1780. The bureau is beautifully crafted from solid walnut and has...
Question about item
Request a virtual viewing

This is an exquisite antique Spanish bureau, circa 1780.

The bureau is beautifully crafted from solid walnut and has beautiful marquetry decoration, of birds and flowers.  The writing fall drops down to reveal an elegant interior with six small drawers and a cupboard.

Below there are two half width drawers and three full width. The bureau has original brass locks and handles.


There is no mistaking the sophisticated quality and design of this bureau and it is sure to receive the maximum amount of attention wherever it is placed in your home.

You are viewing this item in original condition as we have not yet had time to restore it. Any restoration that is required will be done before delivery and is included in the price.

Techniques of wood marquetry were developed in Antwerp and other Flemish centers of luxury cabinet-making during the early 16th century. The craft was imported full-blown to France after the mid-seventeenth century, to create furniture of unprecedented luxury being made at the royal manufactory of the Gobelins, charged with providing furnishings to decorate Versailles and the other royal residences of Louis XIV. Early masters of French marquetry were the Fleming Pierre Golle and his son-in-law, André-Charles Boulle, who founded a dynasty of royal and Parisian cabinet-makers (ébénistes) and gave his name to a technique of marquetry employing tortoiseshell and brass with pewter in arabesque or intricately foliate designs. 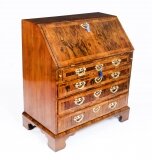